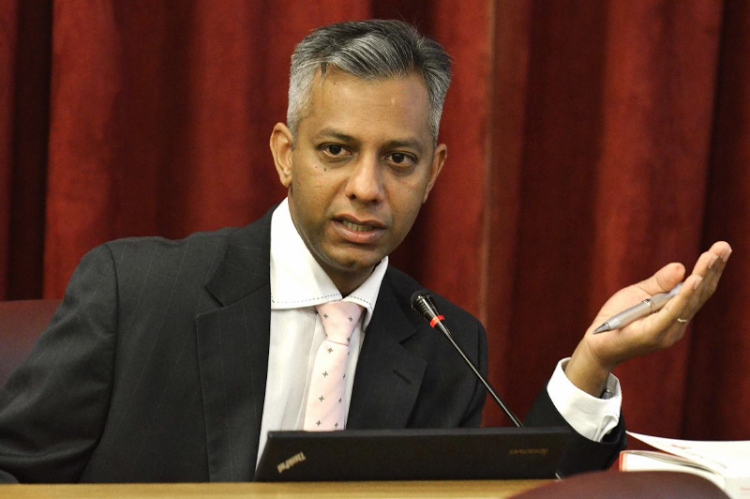 Former Eskom chief financial officer Anoj Singh is still expected to appear before parliament's portfolio committee on public enterprises for an inquiry into the power utility‚ despite his resignation on Monday night.

Parliament spokesperson Yoliswa Landu confirmed on Tuesday morning that "nothing has changed".

Singh was suspended on charges of financial misconduct in September last year. The power utility has been central to allegations of state capture by the Gupta family.

DA MP Natasha Mazzone tweeted on Monday night that Singh "can run‚ but he can't hide".

"The case has been opened‚ the charges are being investigated. No resignation absolves him!! Tomorrow we meet him in Parly too!"

Please rest assured...I laid criminal charges against Anoj Singh on 28 July 2017. He can run, but he can't hide. The case has been opened, the charges are being investigated. No resignation absolves him!! Tomorrow we meet him in Parly too!

One more down! More to follow! Well done South Africans your countless marches and legal battles were not in vain! BREAKING: Embattled Eskom CFO Anoj Singh resigns 'with immediate effect' via @News24 https://t.co/9RoYMU6F8P

A few people on Twitter questioned if Singh had indeed resigned after the confusion around former Eskom Brian Molefe’s resignation last year.

Wait. Hold on people. Is this Anoj Singh thing a retirement or a resignation or just unpaid leave? Has anyone checked?@Eskom_SA @SikonathiM #Eskom

After the Brian Molefe saga, it's only fair to publish Anoj Singh's "resignation letter" so that we are all on the same page as to whether it's a resignation, a retirement, leave or a sabbatical. @Eskom_SA

Our @Eskom_SA must publish Anoj Singh's letter so we can see whether it indeed is a resignation or another vacation or maternity leave. We've been inadvertently taught to read words, not sentences!😂🤣😂🤣

Anoj Singh, who was suspended as Eskom chief financial officer last year, has officially left the parastatal.
News
4 years ago

Business Day reported that Eskom chairperson Jabu Mabuza‚ appointed over the weekend‚ had cancelled his trip to the World Economic Forum in Davos‚ Switzerland‚ so the new board could get down to business.

Mr Jabu Mabuza, together with the company's Interim Group CEO Mr Phakamani Hadebe, met with Eskom executive management team this afternoon for a general overview of the issues that the company is dealing with. The new Board will hold its inaugural meeting later this week.

Eskom executives and the Treasury will approach South African banks to restore lending to avoid the suspension of its bonds by the Johannesburg Stock Exchange (JSE) and to dodge a pending letter of default from the World Bank.

Eskom needs to raise R20-billion over the next few weeks to persuade its auditors that it is a going concern. This will enable Eskom to publish interim financial statements and allow access to foreign capital markets.

If the World Bank issues a default letter during a scheduled meeting with Deputy President Cyril Ramaphosa at the World Economic Forum in Davos this week‚ it will trigger a 14-day recall on its $3.75-billion (R45.2-billion) loan‚ which could trigger a recall on Eskom’s R350-billion debt mountain.

Not a cent to bail out Eskom, says Gigaba