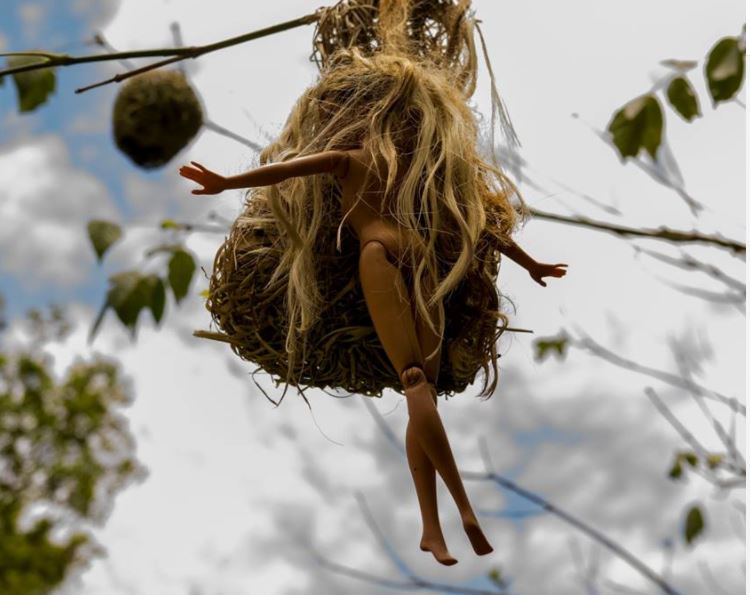 Barbie has got a new weave - courtesy of weaver birds that decided her hair would make good nesting material.
Image: Richard Van Schalkwyk via Facebook

But it’s not what you think. Bird enthusiasts were either delighted or left bewildered by photographs posted on Facebook of a naked Barbie doll hanging by the hair from a weaver’s nest in Johannesburg.

Richard Van Schalkwyk said that he took the photographs at his daughter’s home in Fourways Gardens.

“This Barbie doll was lying in the roof gutter at my daughter's house. A few days later in was part of a weaver's nest! This is not fake. None of the grandkids put it there. Nor did I. Her hair is woven into the nest‚” he said in a post accompanying the images on Sunday.

While some commentators described it as looking like a poster from a horror movie‚ others were delighted and the photos were subsequently shared on the Garden Route Birds Facebook page – where it ruffled even more feathers.

Explaining how the doll got onto the roof‚ he said: "My grandson threw it in the gutter. I checked with the other kids to make sure when he threw it‚ it actually landed in the gutter and not on the weaver's nest."

He said the weaver was possibly trying to charm a potential mate.

“They build a nest to impress their mate. Most of the time the female destroys it and they have to start over. Not sure if they are living in the nest now‚” he said.

“If that female comes along and rejects that nest he’s never going to win with her‚” quipped Taryn Turner.

“I wish I had a video of this happening. I am not sure how long the Barbie was up there‚” added Van Schalkwyk.

This Barbie doll was lying in the roof gutter at my daughter's house. A few days later in was part of a weaver's nest!...