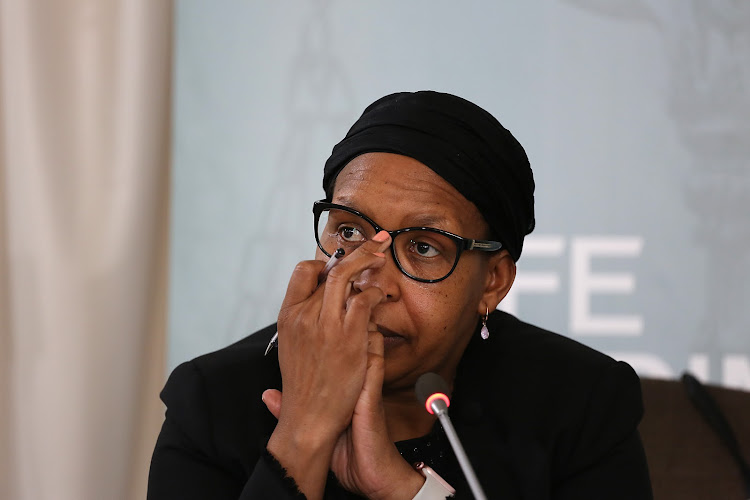 Mahlangu is testifying at the arbitration hearing‚ which aims to give closure to families after at least 143 mentally-ill patients died when moved into NGOs.

Mahlangu has struggled to give brief answers. She asked four times for permission to give lengthy answers saying: "Justice‚ may I beg your indulgence?"

At times‚ an annoyed sounding Hassim interrupted Mahlangu's detailed explanations saying: "Can I ask that the witness please answer the question."

Mahlangu has stuck to a single explanation for her role in the project that led to 143 deaths. This is that officials underneath her did not give her the correct information about the lack of NGOs to house patients and their poor conditions.

She has repeatedly said she doesn’t know why former Gauteng Head of Department Barney Selebano and former Director of Mental Health Makgabo Manamela misled her.

She said: "What was said and told to me in meetings was not necessarily the truth.

"I had a sense the HOD [Barney Selebano] was on top of things."

But during her testimony she noted she incorrectly believed them: "I had no reason not to believe anything …that was said to me in government meetings."

When questioned‚ about the fact that four senior officials testified to being too afraid to disagree with her‚ Mahlangu disputed this saying: "I am a warm person."

At that point‚ families heckled her and shouted out that she was lying. One woman shouted "Sies".

The officials beneath her‚ in contradiction to her‚ testified that she was the driving force behind the project and ruled by fear.

Mahlangu has also reiterated that the decision to close down the Life Esidimeni homes was made by "a collective" of managers.

She conceded‚ however‚ that she was the most "senior member of the collective" as described by Hassim.

Mahlangu's reasons were to save money and enable institutionalised patients to reintegrate into communities.

Hassim pointed out that many patients were eventually placed into hospitals like Weskoppies‚ that cost six times more than what Life Esidimeni charged at R330 a day.

Many of the patients were placed back into hospitals like Sterkfontein rather than living with families or in NGOs‚ meaning they were not deinstitutionalised.

Moseneke summed up Hassim's arguments saying the reasons given for the project "were not cogent".

"The decisions to close down Esidimeni were done for reasons that are not cogent. [You say] I am going to save costs‚ but instead you spend more money.

"I am trying to deinstitutionalise but in fact you put people in hospitals."

Despite multiple warnings and court cases about the project‚ Mahlangu claimed that had she known about the risks of the closing down Life Esidimeni homes‚ she would have not allowed it.

I am being spied on - Qedani Mahlangu

Former Gauteng Health MEC Qedani Mahlangu says she feels "harassed" after a drone hovered above her house on Tuesday.
News
4 years ago

Former Gauteng MEC for health Qedani Mahlangu appeared before a packed Life Esidimeni arbitration hearing on Monday to explain her role in the move ...
News
4 years ago

I did not bring pain and anguish to the nation: Mahlangu on Esidimeni deaths

Former Gauteng Health MEC Qedani Mahlangu does not accept that she brought "so much pain and anguish and disrepute to our nation" and that was she ...
News
4 years ago

Mahlangu: It's not true to say it was my decision to close Life Esidimeni