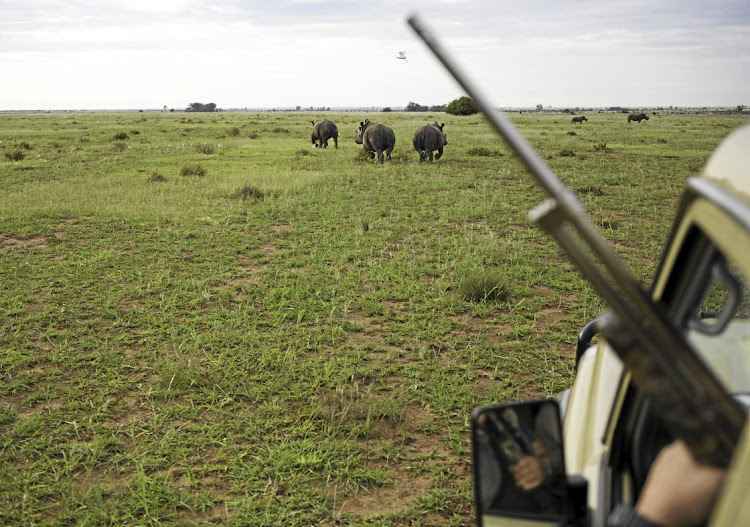 A decrease of poaching rates in the Kruger National Park has been marred by increases in other provinces‚ coupled with a sharp rise in elephant poaching.

Environmental Affairs Minister Edna Molewa said on Thursday a total of 1‚028 rhino were poached in South Africa from 1 January 2017 to 31 December 2017‚ compared to 1‚054 in the same period for 2016‚ representing a decrease of 26 animals.

At the Kruger National Park‚ which has traditionally borne the brunt of poaching‚ a total of 504 rhino rhinos were poached in 2017. This is 24% less than 2016.

When suspected poacher Joseph “Big Joe” Nyalunga was stopped by police somewhere between Nelspruit and Gauteng‚ it appeared they were too late.
News
4 years ago

"It is with concern that we also report that in 2017‚ 67 elephants were poached in the Kruger National Park and one was poached in KwaZulu-Natal."

In July last year‚ the minister said 46 elephant poaching incidents had been recorded for the whole of 2016. She flagged this as an "emerging threat".

Specific risk areas have been identified and strategies to address the threat are being adapted and implemented‚ the minister said.

Multi-disciplinary teams have made progress in a number of areas‚ including arrests and the stepping up of technological interventions.

"The use of game-changing technological interventions remain key in the fight against poaching. The new technology system that we are using now is at the cutting edge of integrating real-time technology‚ intelligence‚ situational awareness and analysis and is operational in the Kruger National Park. This tool assists rangers‚ protected areas managers‚ investigators and law enforcement agencies and government organisations to combat wildlife crime more effectively. It has been proven to be an extremely effective tool. We are rolling it out to the rest of the country." Last year saw 502 arrests of alleged rhino poachers and 16 alleged traffickers‚ nationally.

Park rangers in Africa’s most famous rhino reserve are going hi-tech to push back against the relentless assault by horn poachers‚ thanks to a ...
News
4 years ago

This represents a decrease from 2016 when a total of 680 poachers and traffickers were arrested.

A total of 220 weapons were seized in rhino-related incidents both inside and outside the KNP in 2017.

Noting with regret that 21 officials were amongst the arrests for poaching-related offences‚ Molewa said SANParks has instituted a programme of integrity testing throughout the organisation.

A number of new trends linked to rhino poaching in South Africa are under investigation by the Hawks.

"Smugglers are coming up with new ways and methods to process horn and smuggle it out of the country.

"This has also been observed in Mozambique and the Hawks are currently communicating with national and transnational law enforcement agencies on the new trends of trafficking rhino horns‚" the minister said.

Molewa said law enforcement teams are now seeing an increase in the number of arrests of higher level syndicate members.

"Given the complexities of these syndicates we regard this figure as a significant achievement.

"These cases were linked to rhino poaching incidents in KwaZulu-Natal and Limpopo and the arrests were further linked to incidences in Swaziland and Mozambique. Ten of these cases involved end-users from Asia."

Molewa highlighted a consignment of horns seized at Johannesburg's OR Tambo International Airport in February 2017‚ en route to Hong Kong via Swaziland. She commented: "It will be published in the Interpol Journal as a case study on best practice in the coordination of investigations."

Two Taiwanese rhino horn traffickers were arrested by the Royal Swaziland Police. With the help of the Hawks in South Africa‚ they were sentenced to 29 years imprisonment after being linked to poaching at Balule Game Reserve‚ Hoedspruit‚ in January 2017‚ as well as rhino poaching incidents in the North West province and KwaZulu-Natal.

Molewa said: "Over and above the sentences imposed‚ the accused were ordered to either replace the rhinos poached in South Africa or to compensate the owners of the animals to the full gazetted value in respect of each of the three rhinos. The men were further ordered to replace or compensate the Government of Swaziland for a fourth rhino." Failure would mean four years additional imprisonment‚ according to the Swazi judgment.

She said coordinated efforts between the Hawks‚ the South African Revenue Service (SARS) Customs and Excise‚ supported by the Environmental Management Inspectors (EMI’s) have resulted in the dismantling of 35 trafficking networks linking the transit countries of Swaziland‚ Mozambique‚ Namibia and Kenya to the end-user countries in Asia.

Cases under way and finalised against international rhino horn traffickers include:

- Zhang Desheng – arrested for possession of 10 rhino horn on 18 August 2016. He was convicted and sentenced to a fine of R1 million or eight years’ imprisonment‚ of which half was suspended‚ on 22 May 2017.

- Ye Zhiwei – arrested for possession of 18 rhino horn on 23 November 2016. He was convicted and sentenced on 19 April 2017 to a fine of R1.2 million or six years’ imprisonment. - Le Xuan Binh - was arrested for possession of five rhino horn from animals poached in KZN and the KNP on 20 June 2017. He pleaded guilty and was sentenced on 4 November 2017 to a R1 million fine or four years imprisonment‚ and an additional four years imprisonment suspended for five years.

- Vua Sun and Bo Yong – arrested for possession of 10 rhino horn on 11 June 2017. The two traffickers pleaded guilty and were each sentenced to seven years imprisonment without the option of a fine.

- Xue Shuangshuang – arrested for possession of 11 rhino horn on 25 July 2017. He was sentenced to four years imprisonment without the option of a fine.

- Jaqueline Similo Nkomo – arrested for possession of two rhino horn in 2017. She is scheduled to be sentenced on 6 March 2018.

The minister emphasised the government's commitment to curb poaching.

"The increases in other provinces‚ coupled with the sharp rise in elephant poaching tells us that as we progress and evolve‚ so do the tactics and methods of the poachers. It is up to us to remain ahead of the game at all times. We will in the year ahead continue to draw on our achievements‚ learn from our mistakes‚ and adapt international best practice. It is only through a collaborative approach that we have come this far – which is a long way from where we were a few years ago."