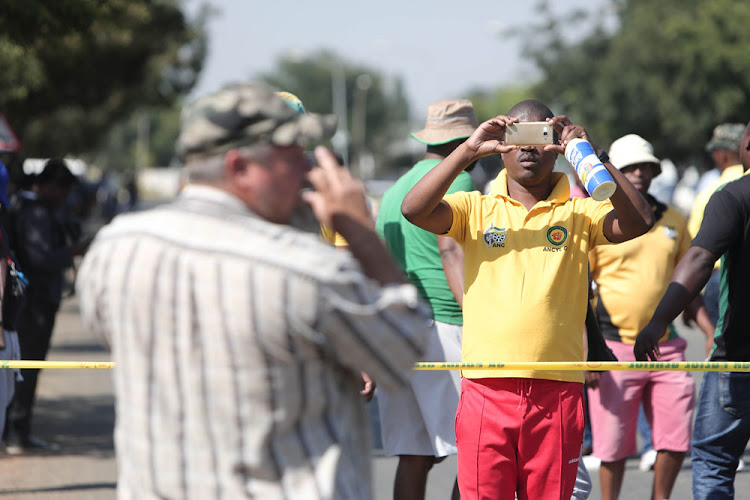 Members of the farming community and protesters take video footage of one another at Hoerskool Overvaal in Vereeniging during protests there
Image: Alaister Russell

Basic Education Minister Angie Motshekga says practical steps need to be taken before English classes can be considered at the Overvaal high school in Vereeniging‚ where tensions flared this month during protests against the school’s Afrikaans language policy.

She encouraged those demanding the immediate enrollment of black and English speaking pupils to calmly discuss the matter.

“Let’s not go and fight with ourselves on matters that we can resolve because it creates unnecessary tension and animosity‚” Motshekga said on Sunday. The minister was addressing a media briefing following the department’s lekgotla last week.

The row erupted after the school refused an instruction by the Gauteng education department to accept 55 English-speaking pupils. The school said it had no capacity to admit the learners‚ and could not set up a parallel stream in the timeframe it was given by the department. Its decision was backed by the High Court in Pretoria.

Basic Education Minister‚ Angie Motshekga on Monday said she and department officials had not anticipated that the issues of Hoërskool Overvaal would ...
News
4 years ago

Motshekga emphasised the need to deal with issues raised by the North Gauteng High Court.

“Let’s deal with issues raised by the judge‚ and not take the matters out of context. The judge raised administrative matters‚ and let’s see if we can address them. The school must have English books and English teachers.”

Giving an update on the school admissions‚ Motshekga said almost all provinces are confronted by similar challenges‚ with Gauteng and the Western Cape being the most affected.

“These challenges lead to the sector’s inability to place all learners who have applied to be placed in schools on time for the start of the school year in January. Despite all efforts by the sector to have learners admitted and registered in school before the end of the year‚ provincial education departments are still inundated with late applications for registration.

“The challenge is worse with the migration of children from rural to big cities during the December holidays‚ who never return to their rural homes. Some of the children arrive in cities during the middle or end of January without having made any applications to any school.

“Parents in rural areas normally do not apply to register their children in schools until the schools open in January [and] late admission and registration affect the commencement of teaching and learning on the first day‚” the Minister said.

She said the department has since January applied a strategy to address the challenge of learners who apply for administration to schools at the beginning of an academic year. This includes stopping schools from dealing with admission during school contact time and referring all late admissions to district offices to direct applicants to identified schools that have vacancies by taking consideration of proximity and curriculum offering.

While Hoërskool  Overvaal in Vereeniging refuses to admit 55 black English-speaking pupils, many other Afrikaans schools have become ...
News
4 years ago