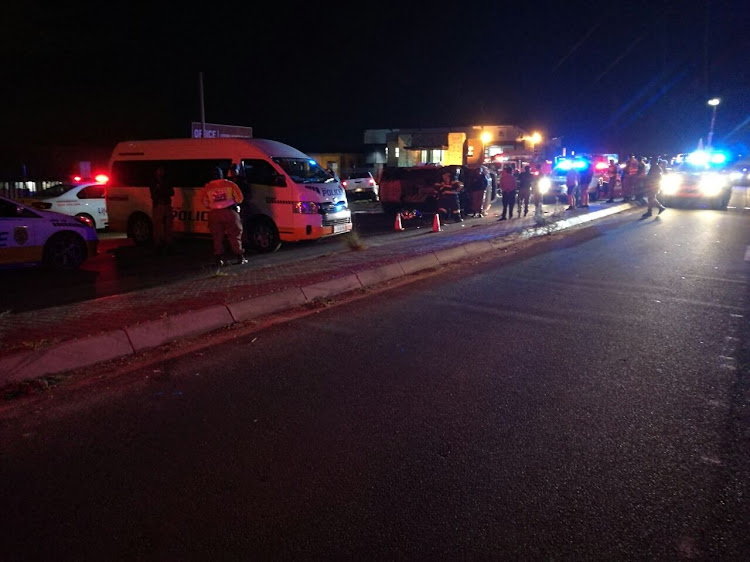 Two JMPD officers‚ Winnie Mokgolo‚ 35‚ and Sophie Ngoasheng‚ 45‚ were fatally injured on Monday evening after a motorist lost control of his vehicle and rammed into a roadblock mounted by the JMPD along Witkoppen Road near Montecasino.
Image: Supplied

Johannesburg mayor Herman Mashaba on Tuesday visited the homes of the two Metro Police officers killed on Monday night when a suspected drunk driver ploughed into the roadblock they were manning to pay his respects to the families of the slain victims.

Accompanied by Michael Sun‚ a member of the Mayoral Committee for Public Safety‚ and JMPD Chief David Tembe‚ the mayor said it was sad that these officers had died in such a manner.

“Sun and I are devastated that the city has lost more JMPD officers in such a manner. It is believed that the driver who caused the accident was drunk. Over the course of the past weekend alone‚ JMPD arrested 308 drunk drivers in Johannesburg‚" Mashaba said.

The two female JMPD officers‚ Winnie Mokgolo‚ 35‚ and Sophie Ngoasheng‚ 45‚ were fatally injured on Monday evening after a motorist lost control of his vehicle and rammed into a roadblock mounted by the JMPD along Witkoppen Road near Montecasino.

The driver was arrested and taken to Sandton police station‚ after blood samples were taken. The two officers were declared dead at the scene by Netcare 911 paramedics.

Two Johannesburg Metro Police Department officers were killed on Monday night when a suspected drunk driver slammed into the road block they were ...
News
4 years ago

"We send our deepest condolences to the families of the deceased JMPD officers‚ who were also our colleagues and friends‚" Mashaya added.

He warned that the city would not tolerate such reckless and criminal behaviour‚ adding that drunk driving not only puts the driver of the vehicle at risk‚ but also places all other road users at risk as well.

It is understood that two other female officers‚ two passengers from the stopped vehicles - a Porsche and BMW - as well as the driver of the double cab‚ also sustained serious injuries during the incident. They were taken to hospital by Emergency Management Services.

One officer‚ Patricia Nukeri‚ who suffered a broken collarbone‚ right leg and punctured lung‚ will undergo surgery on Wednesday‚ the mayor said.