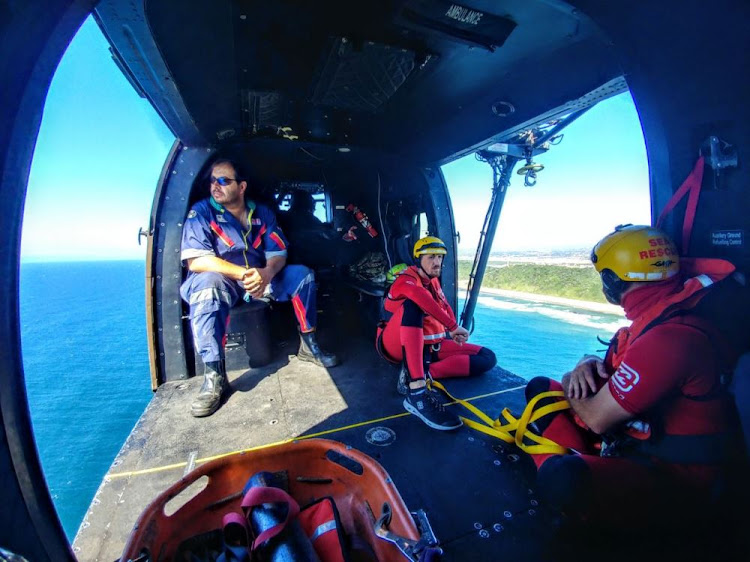 Netcare911 rescue technician Konrad Jones along with two volunteers from the NSRI were part of a multi-agency team which mounted an airborne rescue mission for an ailing sailor on a ship off the coast of Durban on Tuesday.
Image: NETCARE911

A 47-year-old sailor was airlifted from a Panamanian ship off the coast of Durban in a rescue mission mounted on Tuesday morning.

The man remains in a serious but stable condition in a city hospital after the evacuation.

Netcare911 spokesman Shawn Herbst said that medics and volunteers from the National Sea Rescue Institute had flown on South African Air Force helicopter to the bulk carrier‚ which was sailing 50 nautical miles [about 92km] from the coast.

“On arrival at the scene a rescue technician‚ a rescue swimmer as well as two Netcare911 Advanced Life Support Paramedics were lowered onto the ship‚ where they immediately began to stabilise the patient on the deck of the 300m-long coal-carrying vessel‚” he said.

“The crew then prepared the patient for the evacuation using a specialised stretcher that was hoisted back up into the helicopter‚” Herbst added.

Police Search and Rescue divers recovered the body of a man who drowned while swimming at a dam in Umhlali‚ north of Durban‚ on Sunday night.
News
4 years ago

The search is continuing for a 20-year-old man who is reported to be missing after being swept out to sea by rip currents near Shelly Beach on the ...
News
4 years ago