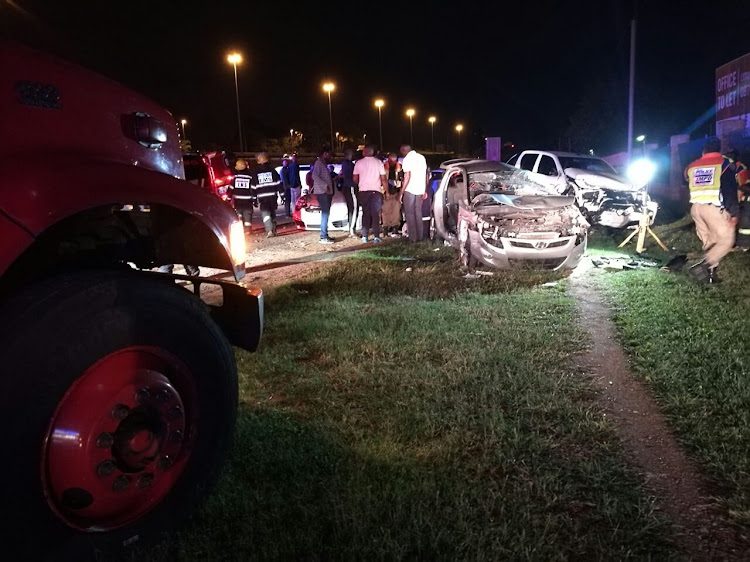 The scene of the fatal crash on Monday night which claimed the lives of two JMPD officers.
Image: Supplied

The driver of a white Toyota Hilux which ploughed into two Johannesburg Metro Police Department officers at a manned roadblock – killing them instantly - had at least three empty bottles of spirits in his vehicle.

This was revealed by JMPD's spokesperson‚ Chief Superintendent Wayne Minnaar.

"There were gin bottles and Smirnoff Spin empty bottles inside the car. The officer who was recording the accident said he couldn’t count the number of bottles‚" said Minnaar.

The driver‚ 34‚ who is remanded in custody and yet to be charged‚ cannot be named as he has not appeared in court.

The two female JMPD officers‚ Winnie Mokgolo‚ 35‚ and Sophie Ngoasheng‚ 45‚ were fatally injured on Monday evening after a motorist lost control of his vehicle and rammed into a roadblock mounted by the JMPD along Witkoppen Road near Montecasino.

He was arrested and taken to Sandton police station after blood samples were taken. The two officers were declared dead at the scene‚ which took place along Witkoppen Road in Paulshof‚ by Netcare 911 paramedics.

Meanwhile‚ JMPD Chief David Tembe‚ who has been at the helm of the police unit for just 27 days‚ said this was a sad day for his officers as the officers were in their line of duty.

“This is hard. We are here with the families to tell them what happened to their loved ones. I don’t know what to say anymore when we lose our own while serving the community‚ but we’ll continue to perform our duty and to serve our community‚” he said.

It is understood that two other female officers‚ two passengers from the stopped vehicles - a Porsche and BMW - as well as the driver of the double cab‚ also sustained serious injuries. They were taken to hospital by emergency services.

Earlier‚ Johannesburg mayor Herman Mashaba warned that the city would not tolerate such reckless and criminal behaviour‚ adding that drunk driving not only puts the driver of the vehicle at risk‚ but also places all other road users at risk as well.

One officer‚ Patricia Nukeri‚ who suffered a broken collarbone‚ right leg and punctured lung will undergo surgery on Wednesday‚ the mayor said.

A wreath-laying ceremony will be held at the scene of the accident on Thursday‚ 1 February 2018.

Two Johannesburg Metro Police Department officers were killed on Monday night when a suspected drunk driver slammed into the road block they were ...
News
4 years ago