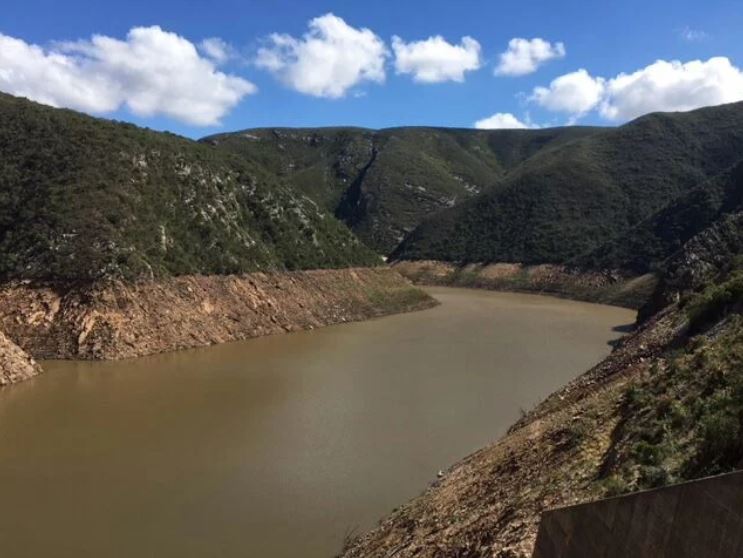 The Kouga Dam is at a critically low level.
Image: Kouga Municipality

Two farming towns in the Eastern Cape might have their Day Zero sooner than Cape Town. The only dam supplying the area is at a critical level‚ while the process of sinking boreholes is being hampered by a rocky and mountainous terrain.

The severe drought in Hankey and Patensie in the Gamtoos Valley prompted the Kouga Municipality to introduce strict water rationing last August.

Executive Mayor Elza van Lingen told GroundUp on Wednesday that “Day Zero” — when the municipality would no longer be able to provide water through the taps — was mid-March.

“I cannot give an exact date but according to our estimates‚ if we cannot receive good rains now in our catchment area‚ then by mid-March we will have Day Zero.”

According to a 2016 Stats SA survey Hankey had a population of about 12‚000 people‚ and Patensie 5‚500 people. A further 40‚000 people are estimated to live in the surrounding rural and farming communities. The main economic driver of the towns is agriculture; citrus‚ vegetables‚ watermelons and maize are the main crops.

Van Lingen said the drought had led to job losses on farms and she expected more job shedding if the rains did not come.

“The towns receive an annual quota from the Kouga Dam.The demand for water has been increasing as the population has grown and the annual quota has not been sufficient to meet the demand for these past few years.”

“The towns receive water from the Gamtoos Government Water Scheme‚ which is administered by the Gamtoos Irrigation Board. The scheme consists of the Kouga Dam and the downstream canal system.”

Day Zero for Cape Town pushed back a few days

DA leader Mmusi Maimane announced on Tuesday that Day Zero for the drought-stricken City of Cape Town has been pushed back to April 16.
News
4 years ago

“The level of the Kouga Dam was at 9.75% this morning [30 January]. The dam could be empty by mid-March 2018 if no significant rain falls in the catchment area.”

Chairman of the Patensie Farmers Association‚ Petros Du Preez said he was afraid that if rain did not fall‚ crops would wilt‚ resulting in massive job losses.

”We are desperate. We depend on irrigation for our crops. The Kouga Dam has reached a historic low level and this will soon affect our crops as there won’t be any water to irrigate the farms.”

“The other option is to sink boreholes‚ but borehole water is not sufficient to irrigate our crops. I am afraid this will have an effect on the economy of the area because of massive job losses.”

Guards are being posted at a popular Cape Town spring after an outbreak of fisticuffs.
News
4 years ago

Van Lingen said an emergency action plan had been compiled and the municipality had approached the Gamtoos Irrigation Board and the Department of Water and Sanitation for funds. The plan involved surveying sites for drilling of boreholes near the Kouga Dam at a cost of R28 million.

However‚ Van Lingen pointed out‚ the Gamtoos Valley is not suitable for sinking of boreholes. Recently‚ she said‚ a borehole had been drilled on a site some seven kilometers from Hankey to a depth of 225m‚ but no water was found.

Van Lingen said: ”The municipality will further be installing rainwater tanks at municipal buildings and would like to encourage other state departments to do so as well.”

The weather's hot‚ but now's the time for cool heads

The current drought gripping the south-western parts of South Africa started as far back as the end of the 2015 summer when the rains expected to ...
Ideas
4 years ago

“The broader solution is the development of a desalination plant at Jeffreys Bay. This will allow us to meet the coastal towns’ water requirements and their quota from other dams in the area can then be used for Hankey and Patensie. It will cost about R323-million to build the plant‚ which will secure Kouga’s short- to medium-term water requirements.”

She pleaded with the general public to use water sparingly.

Ward councillors had been asked to speak to their communities about the seriousness of the situation. Public meetings were being held this week in the worst affected areas so as to come up with a joint plan‚ said Van Lingen.