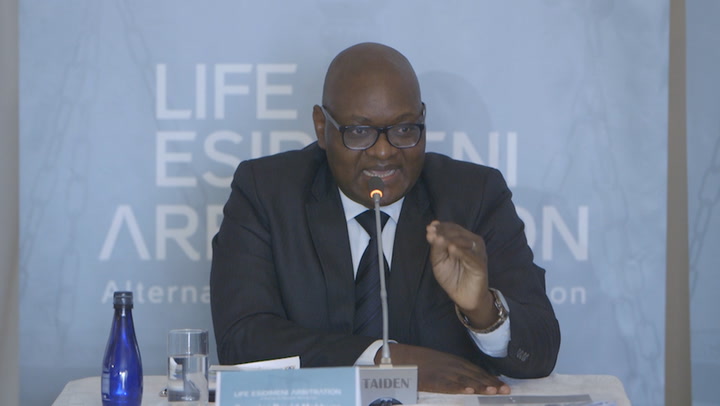 Gauteng Premier David Makhura testifies during the Life Esidimeni hearings - but the DA has questioned his claims of ignorance.

Gauteng Premier David Makhura's explanation that he didn’t know that Life Esidimeni patients were being sent to NGOs is hard to believe.

This is according to the Democratic Alliance's Jack Bloom‚ who said Makhura was in the Gauteng legislature when Bloom pointed out patients were going to NGOs after the Life Esidimeni homes were closed down.

Makhura testified at the Life Esidimeni hearings that the former Gauteng health MEC Qedani Mahlangu "misled" him and said patients were only being moved into state institutions.

The Life Esidimeni hearing’s aim is to find closure for families after 144 mentally ill patients died following the move of 1700 people from these Esidimeni homes.

Makhura in his testimony‚ given under oath‚ said multiple times that he never knew patients were being sent to NGOs.

Gauteng finance MEC Barbara Creecy also testified‚ under oath‚ that she did not know the end of the Life Esidimeni contract would lead to patients being moved into NGOs. She produced a presentation showing that Mahlangu explained that patients would be moved into state facilities.

Creecy testified she was told by Mahlangu there would be a 20% reduction of patients staying at the Life Esidimeni homes each year for five years.

Makhura testified he was told there were 4000 spare government beds to take psychiatric patients that needed to be institutionalised. He testified he didn’t know that psychiatric hospitals were full.

But Bloom described this as “an appalling failure… to say that he never knew that patients were going to be sent to NGOs rather than state institutions".

Bloom pointed out that there were court cases‚ letters‚ press releases‚ media reports‚ family marches and written and spoken replies in the Gauteng legislature showed the mentally ill were going to be sent to NGOs.

Makhura apologised to the families for the tragedy‚ which happened when he was head of the provincial government‚ and asked for their forgiveness.

Bloom said: "Makhura is trying to make amends by apologising and reaching out to the families of those who died‚ but the Esidimeni deaths will be an eternal blot on his reputation.”

"I also warned several times in the Legislature that there would be a disaster as there were not enough suitable NGOs for the patients. On 15 March 2016‚ Mahlangu said in an oral reply to my questions that 1835 patients from Esidimeni would be placed in alternative homes before the end of June‚ and that NGOs were hiring staff and being given licenses to look after them.

"Makhura was present in the House when she gave this reply and I expressed my doubts that everything was going as smoothly as she claimed‚” he added.

Despite Makhura's presence when the issue was discussed‚ he testified under oath he did not know patients would be moved to NGOs.

Families of victims responded warmly to Mathura's presence at Esidimeni. His office has spent millions on holding the hearings in order to find out what happened.

R13-million was budgeted for the cost of three weeks of hearings‚ but the hearings have taken about 10 weeks.

The premier's spokesman‚ Thabo Masebe‚ said the cost will be much higher than R13-million due to the length of the hearings.

Figure for deaths in Esidimeni tragedy may be higher

The number of people who died in the Life Esidimeni saga could be 156‚ rather than the accepted number of 144 deaths.
News
4 years ago

The Gauteng Health department is mired in corruption and what Premier of Gauteng David Makhura calls "scams". It is also broke. These allegations ...
News
4 years ago

Esidimeni hearings: government will have to compensate victims’ families

As the Life Esidimeni hearings come to a close‚ Justice Dikgang Moseneke has thanked the Gauteng government for organising them and reminded the ...
News
4 years ago

As the Life Esidimeni hearings wrap up on Wednesday‚ the motive for the tragedy is still unclear.
News
4 years ago