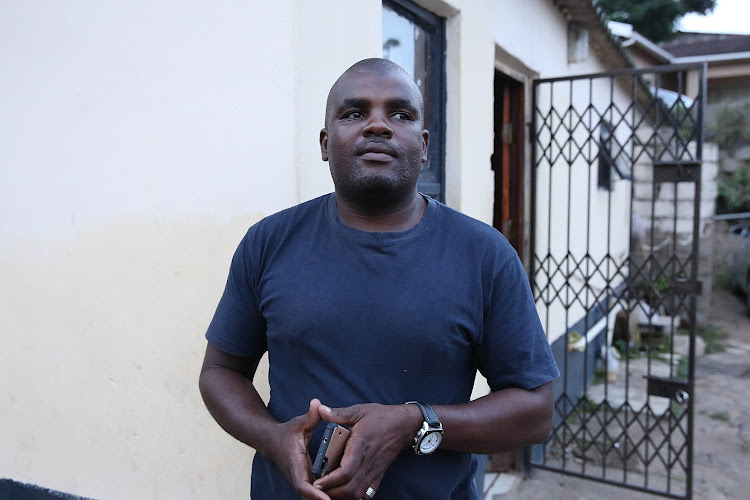 Nkosinathi Mjwara, father of a 16-year-old daughter, Thabisile, who was involved in the crash in Ntuzuma last year.
Image: THULI DLAMINI

Mondli Zinsongo - the man behind the wheel of an overloaded taxi which hit a bus and claimed the lives of five children one year ago outside Durban - has yet to face justice.

After the 30-year-old sauntered out of the dock in the Ntuzuma Regional Court on Wednesday‚ he shared a lighthearted conversation in the hall with a friend.

He faces five counts of culpable homicide and a sixth of reckless and negligent driving‚ borne out of a horror crash on the first day of school in 2017.

His taxi had been cleaved in half by the impact with the bus leaving four dead and scores injured.

Bloodied school shoes and bags which lay strewn across the road were a grim reminder of the devastating carnage.

Among the dead was Thabisile Mjwara‚ a 17-year-old Sivananda High School pupil who may well have been spared that day.

“She had asked me to take her to school that morning but I was late so she took a taxi. I always think to myself if I had taken her in my car things would have been different‚” her father‚ Nkosinathi Mjwara‚ said.

A year on‚ dealing with her death still took its toll‚ he said.

Pupils Ntobeko Ngidi‚ Sicelokuhle Khumalo-Rubushe‚ Sibusiso Sibiya and Ndumiso Makhanya also lost their lives in the accident. “The first day of school is the worst for me...it’s so hard. This year I couldn’t even go to work...it was too much for me‚” Mjwara said.

Shortly after the crash‚ Zisongo had to be guarded by heavily armed police as an irate group of community members swelled around him. He had stood‚ with his head bandaged‚ looking wild-eyed before he was rushed into a police vehicle.

“That is the only time I saw him...I know he lives somewhere here but he is someone I try not to think about‚” Mjwara said.

“I don’t even want to have his face in my mind. It is because of him that I do not have my first-born daughter anymore.”

He is expected to return to court next week.