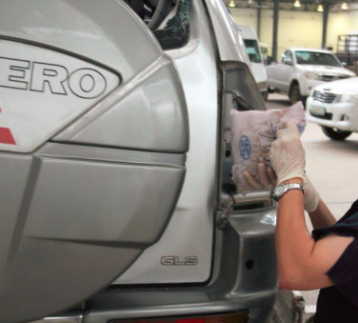 What appears to be drugs were discovered stuffed inside the tail lights of this smashed Pajero SUV.
Image: SAPS

A driver who survived a rollover crash in the Northern Cape was promptly arrested on drug charges after police discovered “cocaine” stuffed inside the tail lights of his smashed Pajero SUV.

“He had been driving on the N14 between Upington and Olifantshoek‚ when he reportedly got involved in an accident wherein the vehicle overturned‚” said Captain Philani Nkwalase from the Hawks.

The Hawks’ Serious Organised Crime unit descended on the scene after being alerted that what appeared to be drugs were found concealed in the vehicle‚ which had Gauteng registration plates.

“A suspicious substance that appeared to be cocaine was found hidden behind the back lights and further investigation uncovered more cocaine worth approximately R3.1-million concealed in false compartments of the vehicle‚” said Nkwalase.

The 53-year-old man was arrested at the scene of the crash in Upington in the Northern Cape on Wednesday.

He was expected to appear in Upington Magistrate’s Court on Thursday to face a charge of dealing in drugs.

The man alleged to have killed two traffic officers after he ploughed into a roadblock will be applying for bail in the Alexandra Magistrate's Court ...
News
4 years ago

420 Café‚ probably the only coffee shop of its kind in South Africa‚ is on a discreet slipway off a major road in Sandton‚ Johannesburg. One ...
Lifestyle
4 years ago

A man has miraculously survived a collision with a truck that pulverised his vehicle in Vereeniging early on Thursday.
News
4 years ago