'A farmer who loses hope is dead' 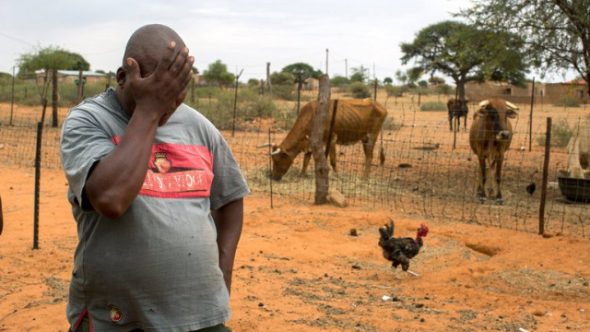 A farmer in the Eastern Cape is overcome by emotion after the NGO Droogte Hulp delivered animal feed on his farm.
Image: DROOGTE HULP

Emaciated cattle‚ barren land and a livelihood slowly crumbling to dust. This is the reality faced every morning by Wilhelm Stemmet.

He has joined the ranks of farmers whose cries for help ring out from far and wide as they try to survive in the midst of a debilitating drought. The rooibos and cattle farmer from Vanrhynsdorp in the Western Cape is hoping for rain‚ but casts his eyes upwards to blue skies.

Stemmet described his daily routine‚ waking up to barren farm land‚ as an image that he has been forced to become accustomed to. Dusty winds like he has never experienced‚ emaciated animals and farm workers trying to stretch out whatever work there is available.

“I am 55-years-old and I have never experienced a drought like this. Everything on the farm is going to ruins‚” he told TimesLIVE.

Stemmet cannot help but get emotional when he speaks of the financial burden of the drought.

“It is a lot of stress on one person because everyone looks to you to for an answer - the animals‚ your workers‚ your family. But I will remain hopeful that the rains will come anytime soon. The farm workers we have supported us very well.”

During the interview‚ he apologises profusely for allowing his emotions get the better of him.

“It weighs heavily on all of us and especially me as the provider. I am thankful for all the help that we do get. We still have drinking water which does not make the situation for us as dire. It would be a very sad day when we don’t have drinking water‚” he said.

But this doesn’t help his crops.

“Rooibos tea is dependent on rains. We would normally get 250 mm of rain but the past year we only got 30 mm of rain. There is no growth. With the rooibos tea‚ you get a quarter of your normal harvest. My rooibos business is being threatened. I can see it with my harvest that I don’t get the quantities I got in previous years. Most farmers have either sold or slaughtered their livestock. I have had to decrease my livestock numbers.”

“The difficult part is the circumstances surrounding this drought. Your workers don’t have work; you can’t really farm. You can’t have the workers…who for so many years looked to you as a source of income. I don’t know what is worse‚ me not farming or my workers being left jobless.”

This picture of devastation by the drought is playing throughout the country. It is heartbreaking‚ sore‚ you are angry.

Baard said that most of his farmer friends operated with reduced livestock numbers. Grazing land has turned into sandy patches.

Even though he has come to terms with the “new normal”‚ he remains hopeful that the rain will return.

“If a farmer loses his hope‚ he is dead.”

Both of the farmers are thankful to Burre Burger‚ a resident from Vredendal‚ who took it upon himself to help bring relief to some of the desperate farmers. That is how the organisation Droogte Hulp came into being in 2017.

“[Droogte Hulp] started out small and to date we have spent R30-mllion in funds on animal feed and transportation as well as food parcels to farm workers‚” he said.

Burger himself is not one to let the dry land make him loose focus. He keeps encouraging farmers whenever he meets them.

“We told the farmers that we aren’t delivering feed‚ we are delivering hope to people. We see every day as a day closer to when it will rain again.”

Chief Economist for AgriSA‚ Hamlet Hlomendlini‚ said recent stats from ABSA’s Agri Trends‚ showed the expected commercial production of wheat in South Africa was about 1.4-million tons‚ almost 23% less than the previous season. The decline was as a result of poorer than expected yields‚ especially in the Swartland area it the Western Cape‚ which is the main producing area.

“On the other side‚ total maize area planted estimate is 2.3-million hectares‚ less than the previous season area of 2.62-million hectares. It is said that producers had initially intended on planting 2.47-million hectares‚ but due to very warm weather and lower than expected rainfall in the western parts of South Africa’s maize belt‚ some farmers were not able to sow their intended area.

The organisation’s head of natural resources‚ Janse Rabie‚ said low rainfall in the Western Cape was a problem as early as 2015. But the effects were felt in other provinces such as the Eastern and Northern Cape.

Meet the farmers living on the banks of Cape Town's largest water supply, the Theewaterskloof dam.

The South African Local Government Association has called for a collective effort to deal with the water crisis facing municipalities across the ...
News
4 years ago

The drought that’s hit Cape Town and surrounding areas‚ officially the worst in recorded history‚ has done us all some good.
News
4 years ago