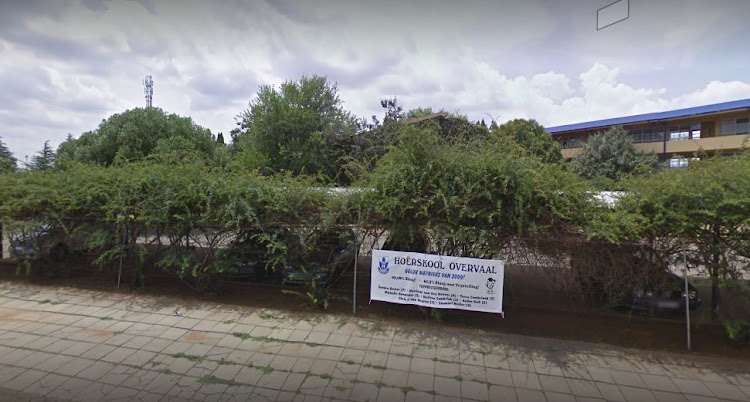 The department of education's Edward Mosuwe said the demand was not for Afrikaans instruction to cease at the school‚ only for it not to be exclusive.
Image: Google Maps

The governing body of Hoërskool Overvaal had attempted to control the admission of new learners to the school‚ insisting that no learners may be admitted to the school unless they submit to Afrikaans-only instruction.

As a result‚ despite the composition of the local community surrounding the school‚ the school remains effectively a white school.

These are the submissions the Gauteng Department of Education has made to the Constitutional Court.

The department is seeking leave to appeal against an order of the Pretoria High Court last month‚ which set aside the department’s instruction to the school to admit 55 learners who wished to be taught in English.

In an affidavit filed with the Constitutional Court on Monday‚ Gauteng education head of department Edward Mosuwe said Hoërskool Overvaal was a public school with duties to the community in which it was situated.

Basic Education Minister‚ Angie Motshekga on Monday said she and department officials had not anticipated that the issues of Hoërskool Overvaal would ...
News
4 years ago

He said the school’s governing body had thus far insisted that it must be a single-medium Afrikaans language school.

“As a result‚ more than 20 years after the advent of democracy it remains an almost exclusively white school.”

Mosuwe said since before the 2016 school admissions‚ there had been a demand from predominantly “African” residents within the immediate vicinity of Hoërskool Overvaal for the school to accommodate learners in its feeder area who wanted to be taught in English.

Mosuwe said the department concluded that Overvaal had the capacity to accommodate the 55 learners who qualified for admission to the school in terms of the admission regulations made under the Gauteng School Education Act.

Mosuwe said the high court decision involved important constitutional issues of procedure and substance relating to‚ among others‚ whether issues of language could be used to deny learners admission to a public school in Gauteng.

Mosuwe said in the past‚ the area in which the school was situated was a predominantly white Afrikaans area‚ but this had changed since 1994 and the area was now dominated by non-Afrikaans speaking persons.

There was now demand for the school to open up to English learners as two other English-instruction schools in the area were overcrowded.

Mosuwe said the demand was not for Afrikaans instruction to cease at the school‚ only for it not to be exclusive.

Mosuwe said the Gauteng admission regulations expressly prohibited unfair discrimination on grounds of language and provided for a system of admissions which was dictated to by location‚ and not by language policy.

He said in terms of the School Act‚ the powers of a public school governing body over admissions and language policies were subject to any applicable provincial law.

“The admissions policy or language policy of Hoërskool Overvaal accordingly could not prevail over the Admission Regulations.”

The department has filed a similar application in the high court seeking leave to appeal to the Supreme Court of Appeal against the judgment of Judge Bill Prinsloo.

It has indicated it would not pursue that application unless the Constitutional Court application is rejected.

Gauteng education MEC Panyaza Lesufi is not taking the temperate approach of Basic Education Minister Angie Motshekga towards the implementation of ...
News
4 years ago

Basic Education Minister Angie Motshekga says practical steps need to be taken before English classes can be considered at the Overvaal high school ...
News
4 years ago