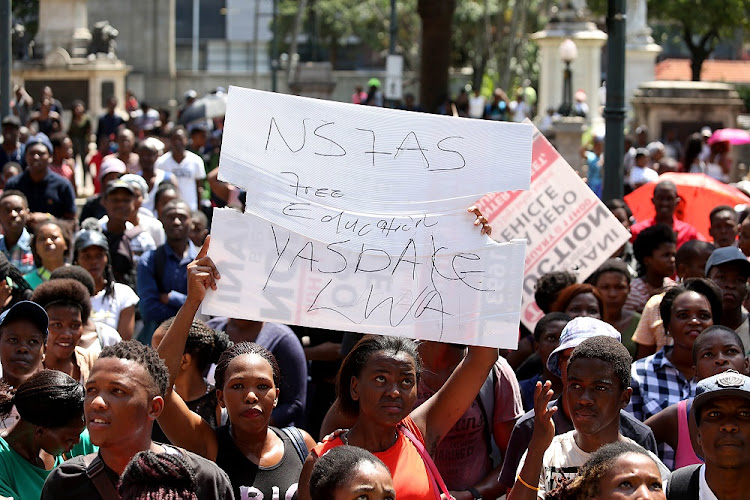 Unisa students ran rampant through the Durban city centre‚ stoning cars and overturning bins during a tense stand-off over fees.

A group of several hundred moved from Unisa’s Durban campus to the city hall‚ leaving a trail of destruction in their wake.

Police finally caught up with the group when they arrived at the ANC’s provincial office‚ and forced them to disperse.

Defiant students broke concrete bins and hurled stones at riot police – who returned the favour with rubbers bullets‚ teargas and stun grenades. Dissension stems from several hundred students not having received their study grants and thus unable to commence with the academic year.

The development sparked clashes between students and police‚ which saw running battles at the central Durban campus on Monday.

Earlier in the day the SRC threatened a “national shutdown” of the university should a National Student Financial Aid Scheme [NSFAS] funding crisis remain unresolved.

National SRC President Zandile Sodladla said that thousands of students had not received study grants - preventing registration and commencement of their academic programme.

Close to 80‚000 students enrol themselves annually in the correspondence institution in KZN.

Riot police remain on high alert ahead of a planned march by the students through the city on Friday.

Unisa students in Durban took to the streets in protest over fees on Thursday, 8 February 2018. The protest was sparked after several students had not received their study grants and could not com...

The student representative council of Unisa has threatened a “national shutdown” of the university should a National Student Financial Aid Scheme ...
News
4 years ago

KwaZulu-Natal University of South Africa students who claim to have been left high and dry by the National Student Financial Aid Scheme (NFSAS) have ...
News
4 years ago