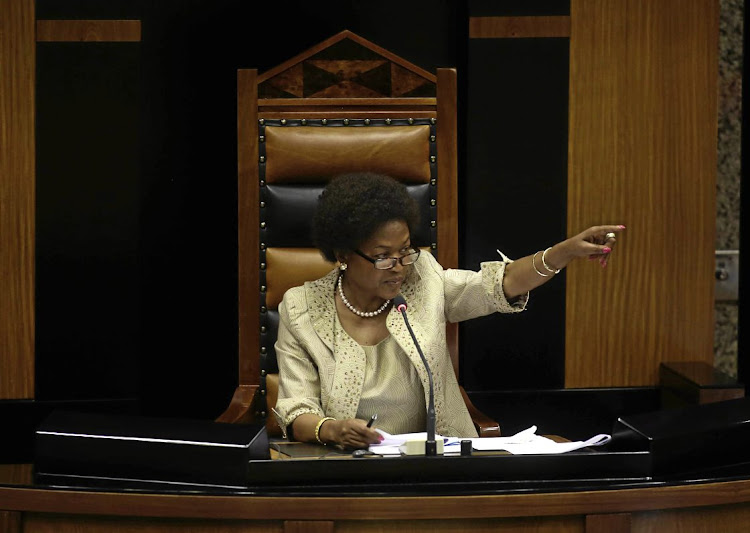 National Assembly Speaker Baleka Mbete has instituted proceedings to remove the chairperson of the Independent Communications Authority of South Africa (Icasa) after he was convicted of fraud last month.

Mbete made the announcement on Thursday morning through parliament's public communication mechanism‚ commonly known as the ATC‚ or announcements‚ tablings and committee reports.

In her correspondence‚ Mbete instructed the portfolio committee on communications to commence with proceedings to oust Rubben Mohlaloga‚ a former ANC MP‚ as chairperson of the communications regulator.

IN FULL | Mbete's statement on state of the nation postponement

On Tuesday afternoon on the steps of Parliament‚ Speaker Baleka Mbete‚ flanked by National Council of Provinces chair Thandi Modise‚ announced at the ...
Politics
4 years ago

Mohlaloga was last month convicted of fraud and money laundering after he was charged with defrauding the Land Bank to the tune of R6 million while he served as the chairperson of parliament's portfolio committee on agriculture several years ago.

Mbete acted on the matter following a letter from communications minister Mmamoloko Kubayi-Ngubane‚ in which she alerted parliament to Mohlaloga's conviction and requested that he be removed from his position.

"A letter dated 26 January 2018 has been received from the Minister of Communications..(a) informing the Assembly that the Chairperson of the Independent Communications Authority of South Africa (Icasa)‚ Mr Manyaba Rubben Mohlaloga‚ was convicted on charges of fraud and money laundering on 15 January 2018; (b) indicating that in terms of section 6(1)(j) of the Independent communications Authority of South Africa Act‚ 2000 (Act No 13 of 2000) (the Act)‚ a person who has been convicted of fraud may not be appointed as a councillor of Icasa; and requesting the Assembly to commence with the process of removing the councillor from office in terms of section 8(3)(b) of the Act‚" said Mbete in her correspondence to the portfolio committee on communications.

State of the Nation Address by President Zuma is postponed

Parliament's presiding officers Baleka Mbete and Thandi Modise on Tuesday afternoon announced the postponement of the State of the Nation Address by ...
Politics
4 years ago

State of the nation address postponed

A request from opposition parties to postpone the president’s state of the nation address “is receiving consideration“, the parliament’s speaker ...
Politics
4 years ago