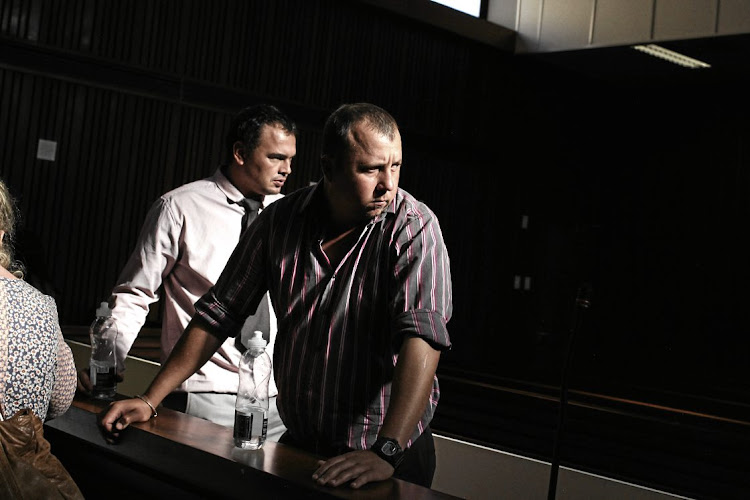 Willem Oosthuizen, left, and Theo Jackson have applied to the Supreme Court of Appeal to have their convictions and jail sentences overturned.
Image: Alaister Russell

The man who was threatened with death and forced into a coffin by two farm workers in Middelburg‚ Mpumalanga‚ on Thursday said he was shocked to hear that his attackers had been granted leave to appeal their sentence.

Theo Jackson and Willem Oosthuizen will be presenting their case before the Supreme Court of Appeal‚ where they are hoping to have their convictions and jail sentences overturned. The court issued the order on February 2.

"It is shocking news and‚ no‚ I didn't know about it until you told me now. But it's my battle and I am ready to fight it‚" Victor Mlotshwa told TimesLIVE.

His biggest concern was how his ailing mother would take the news as several times during the trial‚ she was led out of the courtroom after having emotional outbursts.

In a lengthy trial in the High Court sitting in Middelburg‚ Mlotshwa had to go through the trauma he suffered at the hands of Oosthuizen and Jackson in August 2016. In October 2017‚ the court found the pair guilty of attempted murder and assault with intent to cause grievous bodily harm to not only Mlotshwa but another man‚ Delton Sithole. They were further found guilty of intimidation and kidnapping.

Jackson faced another charge of defeating the ends of justice after he burnt the coffin‚ which would have been used as evidence.

Jackson and Oosthuizen had maintained they had done nothing wrong‚ denying they had ever laid eyes on Sithole. They accused him of fabricating evidence.

Sithole had alleged that they had accused him of trespassing after they found him walking on a footpath. They repeatedly called him a k*ff*r as they hit him‚ he said.

He claimed they only released him when when they spotted Mlotshwa a short distance away‚ also on the footpath‚ and went after him saying‚ "Here is another k*ff*r."

Jackson and Oosthuizen's version was that they had confronted Mlotshwa after they found him in possession of stolen copper cables. They said he had threatened to burn their crops and harm their families should they take him to the police and they therefore put him in the coffin in an effort to scare him.

Mlotshwa‚ however‚ said he had done nothing to provoke them and he was waiting to hitch hike to town when he was attacked. He claimed to have been beaten‚ cable-tied to the back of their bakkie and driven to a remote area‚ where he was forced into a coffin as he pleaded for his life.

The two accused were arrested after a video they filmed of themselves‚ forcing Mlotshwa into the coffin‚ went viral.

A video shared on social media of a white teacher telling black pupils that they could remain “idiots” has stirred up a bitter controversy over ...
News
4 years ago

The cables Mlotshwa was accused of stealing were never presented to the court as the pair claimed to have given them to another farm worker.

Judge Segopotje Mphahlele‚ who had heard the case‚ had denied Jackson and Oosthuizen leave to appeal their sentence‚ describing their crimes as appalling‚ disgusting and dehumanising.

A few days after they filed their petition with the SCA‚ they returned to Mphahlele and requested that she grant them bail pending the SCA's decision on whether or not to hear their matter.

Delivering her judgment‚ Mphahlele said the two had failed to raise any new evidence since the last time they appeared before her.

"I am still of the view that there are no reasonable prospects for this appeal‚" Mphahlele said at the time.

A parent was punched in a scuffle involving protesting members of the Economic Freedom Fighters (EFF) outside Hoërskool Overvaal in Vereeniging early ...
News
4 years ago

Beleaguered fashion retailer H&M has been forced to close its doors and evacuate shoppers at the Gateway Theatre of Shopping in Durban amid a planned ...
News
4 years ago