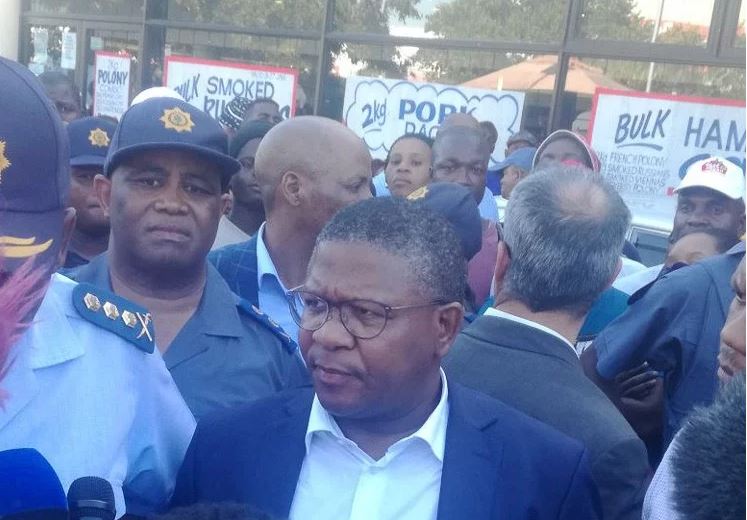 Police minister Fikile Mbalula says soldiers have not been sent to the Western Cape to tackle gang violence‚ as promised‚ because the police “have managed to quell the gang situation”. But residents GroundUp spoke to in Manenberg‚ Philippi and Elsies River disagree.

GroundUp reported last year that during a media briefing in Philippi East police station‚ Mbalula announced that soldiers would be sent to gang-ridden areas in the Western Cape and other parts of the country by Christmas.

Asked by GroundUP why this had not happened‚ Mbalula said on Tuesday: “We have managed to quell the gang situation and we have not been all out for a static deployment of South African National Defence Force.”

How SAPS is tracking 'kingpins who masquerade as hard-working South Africans': Mbalula

Minister of Police Fikile Mbalula hailed the Organised Crime Threats Assessment mechanism as a success after nine suspects in a tax fraud syndicate ...
Politics
3 years ago

Residents of several areas on the Cape Flats disagreed that there had been a decline in gang violence.

Roegshanda Pascoe from the Manenberg Safety Forum said gang violence was still rife in Manenberg. She said she had made a proposal to the minister a while ago proposing that the army be sent to gang-ridden areas‚ but this had not happened.

She said the Cape Flats faced “warfare” and bringing in the army would strengthen the police. “At the moment there are a lot of robberies and stabbings in Manenberg. People are afraid.”

A resident of Marikana informal settlement in Philippi told GroundUp that crime was getting worse in Marikana‚ especially in Section B and C.

I am scared to walk outside. We see young boys carrying fully loaded guns as if it’s nothing‚ and the police are struggling to arrest them‚ especially at night because it is dark; there are no streetlights

“I am worried‚ everybody is worried‚ killings are happening day and night‚” said the resident‚ who did not want to be named. “I am scared to walk outside. We see young boys carrying fully loaded guns as if it’s nothing‚ and the police are struggling to arrest them‚ especially at night because it is dark; there are no streetlights. And these are young boys‚ probably 18 or 19. Sometimes they commit these crimes while wearing school uniform‚” said the resident.

A resident of Elsies River‚ who did not want to give her name for fear of reprisals‚ said gangs stored their guns in the area. “There’s a shop at the corner of 12th Avenue; every morning the Bad Boys go to that shop to get their guns because that is where they store them. The owner of the shop opens at 6am and he pushes out a wheelie bin and that is where the Bad Boys take out the guns. The community is too scared to do something about it. Even now as I speak it is raining bullets here.”

Steenberg Community Policing Forum chairperson Gavin Walbrugh said there had been a reduction in gang violence since the deployment of additional police in the area. There had been “sporadic” shooting but “nothing major”.

“Obviously I cannot speak for other areas‚ but Steenberg and Lavender Hill have been fairly quiet and we are hoping that it will stay like this.”

- This article was originally published on GroundUp

Mbalula fired up by arrest of Eastern Cape drug lords

In one of the biggest drug trafficking cartel busts in the Eastern Cape‚ the Hawks‚ SAPS and the Crime Intelligence Unit (CIU) have arrested five ...
Politics
4 years ago

Mbalula promises Kagiso community he will deal with corrupt cops

Police Minister Fikile Mbalula has made a promise to the community of Kagiso near Krugersdorp on the West Rand to clamp down on corrupt police ...
Politics
4 years ago

Police are set to re-direct resources and capacity from a national to local policing level in a move that will see the installation of regional ...
News
4 years ago