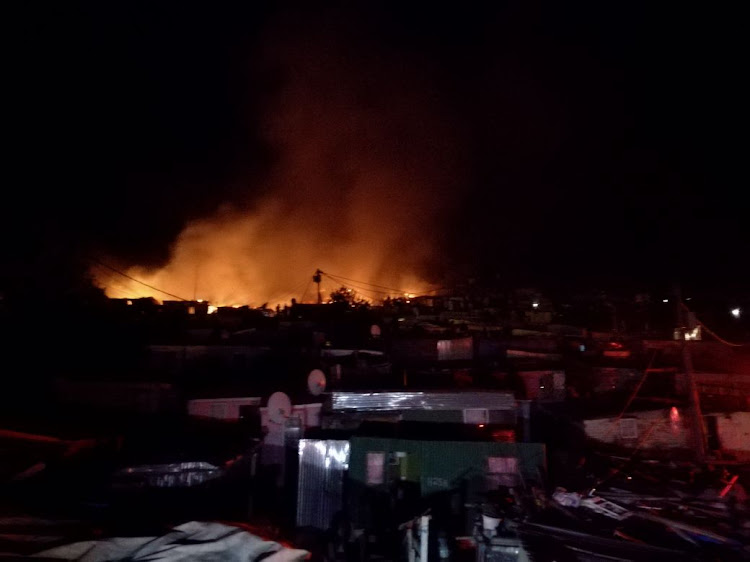 About 350 people were displaced by a fire at Mandela Park in Cape Town.
Image: City of Cape Town

A firefighter was attacked in the early hours of Monday morning as he battled a blaze that razed 95 homes in an informal settlement in Hout Bay.

About 350 people were displaced by the fire at Mandela Park‚ said Cape Town Fire and Rescue spokesperson Theo Layne.

He said one of the firefighters helping to extinguish the blaze sustained injuries to his shoulder after being assaulted by a member of the community.

“Fire is now contained. 20 Firefighting vehicles (10 fire engines and 10 water tankers). More than 70 firefighters on scene. No injuries reported from the public‚” he said in an early morning text update.

“Cause of the fire not established as yet. Crew will remain on scene for some considerable time carrying out mopping up operations.”

The disaster risk management unit is due to assess the damage on Monday.

Firefighter in hospital after colleague dies in Cape blaze

A firefighter is in hospital with burns to his arm and face after he tried to move his vehicle to safety during a blaze in George in the Southern ...
News
3 years ago

A wildfire raging across the mountains outside of Franschhoek has claimed the life of a firefighter in the Western Cape.
News
3 years ago

Firefighter who shot his commander is jailed

A City of Johannesburg firefighter who killed his station commander during an altercation over a disciplinary process has been sentenced to a prison ...
News
3 years ago