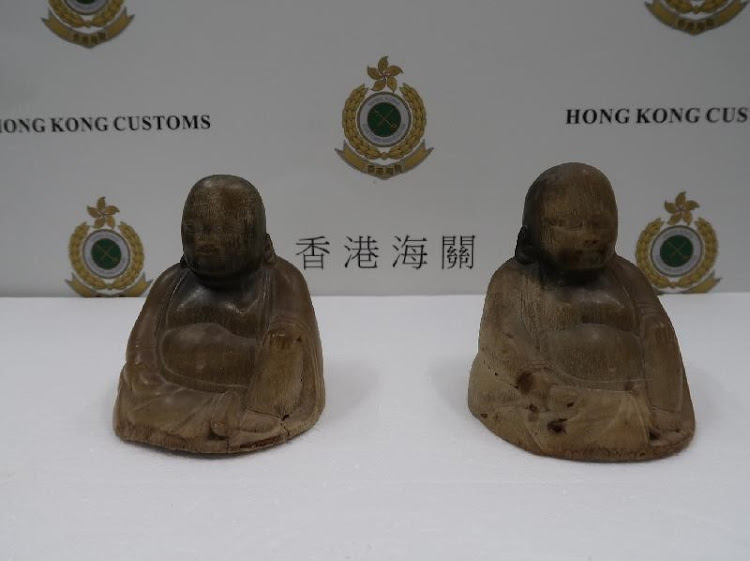 Two rhino horns, carved into the shape of Buddha, were seized in Hong Kong at the weekend after a female passenger from Spain allegedly tried to smuggle them through airport security systems hidden inside an electrical kettle.
Image: Hong Kong Customs and Excise Department

But their efforts were foiled by customs officers who have seized several rhino horns with an estimated market value of HK$2.7-million (R4.1-million) after searching the check-in luggage of passengers arriving on flights from Johannesburg and Madrid.

Two of the horns had been carved into miniature statues of Buddha‚ while others were wrapped in tin foil and foam to fox airport security scanning equipment.

The Hong Kong Customs Department said in an official statement that several horns (with a total weight of just over 12kg and estimated market value of HK$2.4 million) were intercepted at Hong Kong International airport on Saturday.

They also arrested two men‚ aged 26 and 42‚ who arrived in Hong Kong from Johannesburg‚ via Doha‚ Qatar.

“During customs clearance‚ suspected rhino horns wrapped in aluminium foil and foam were found inside a paper box in their check-in luggage. The two men were then arrested and their cases handed over to the Agriculture‚ Fisheries and Conservation Department for follow-up investigation.”

The number of rhinos poached in South Africa in 2017 was lower than 2016’s, according to South African Minister of Water and Environmental Affairs ...
Opinion & Analysis
3 years ago

On Sunday‚ (Feb 11)‚ a 25 year-old woman was arrested at the same airport after customs officers found two suspected rhino horns hidden inside an electric kettle in her check-in suitcase. She arrived on a flight from Madrid‚ Spain.

Both horns‚ with an estimated market value of HK$300‚000‚ had been carved into statues of Buddha The names and nationalities of the three suspects have not been released – and it remains unclear why the horns were not detected during airport security checks in either South Africa or Spain.

More than 7‚000 rhinos have been slaughtered by horn poachers in South Africa over the past decade (with 1‚028 killed last year alone).

It also remains unclear whether the carved horns were intended to be sold as religious symbols or “recycled” into a powder form for traditional medicinal use or other Eastern therapeutic remedies.

Recent studies by the Pew Research Centre suggest that China has the single largest Buddhist population in the world‚ but there have also been several cases where old rhino horns have been stolen from museums and hunters’ trophy rooms across Europe to feed the demand for rhino horn in Asia.

Merc driver arrested with rhino horns in a cooler box

A man driving a C-class Mercedes-Benz has been arrested after police found four rhino horns hidden in a cooler box inside his car‚ not far from the ...
News
3 years ago

Dr Richard Thomas‚ spokesman for the global wildlife products monitoring network TRAFFIC‚ said the two Buddha horns did not appear to have been carved recently.

“If that's the case‚ then it's possibly a case of supplying the material rather than the product. If they are old carvings‚ then they may well have originated in Europe.” He noted that the Rathkeele Rovers – an Irish-based gang that was implicated in several rhino horn trafficking cases – had initially sourced horns from historic collections in several parts of Europe‚ later turning to smash and grab raids on museums.

Commenting on the routes and techniques used to smuggle rhino horns out of Africa‚ Thomas said: “There has been a constant game of cat and mouse over trafficking routes. Obviously the smugglers will use whichever routes they believe will provide the best chance of getting away undetected.

“As such‚ routes and smuggling techniques change‚ although one near-constant is wrapping rhino horn in (metal) foil to try and evade detection by airport scanners.” The Hong Kong Customs and Excise Department said: “Under the Protection of Endangered Species of Animals and Plants Ordinance‚ any person found guilty of importing or exporting an endangered species without a licence is liable to a maximum fine of HK$5-million and imprisonment for two years.”