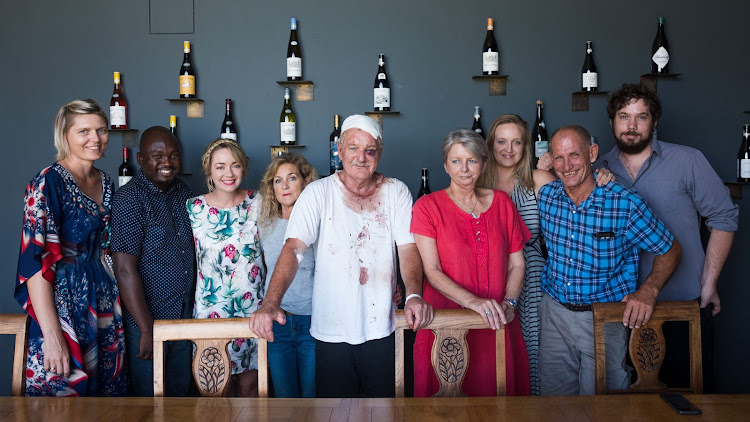 Top winemaker Charles Back with his crew, displaying his wounds and bloodied T-shirt.
Image: Facebook

Hundreds of people hailed top winemaker Charles Back on Wednesday for his indomitable spirit after a violent attack.

Back‚ from Fairview in Paarl‚ posted photos of himself on Facebook after being beaten with a crowbar and “rolled up into a carpet and left for dead in my own home”.

He said he returned to the farm directly from being treated in hospital to “show my millennial counterparts what real work commitment looks like”.

His post had received almost 1‚600 comments by 7pm on Wednesday‚ most of them praising his fortitude and attitude.

“With no hate in his heart he gets up and made a decision to love‚ contribute and to turn a negative into a positive‚” said Frikkie Loubser.

Craig Ress said: “Charles you have been a man of integrity and leading this country by example. It is horrifying to see what thugs can do‚ but so amazingly powerful to see what happens when people with strength don't let them win.”

In his post‚ Back said: “Last night‚ I endured a brutal farm attack here on my Fairview farm in Paarl. This morning‚ I decided to come straight from the hospital and stop by Fairview‚ to show my millennial counterparts what real work commitment looks like‚ as ongoing banter we have between us.

“In truth and in all seriousness‚ the attack was physically and emotionally painful. I am so grateful to be alive‚ and my heart goes out to all the people that have lost their family members in the ongoing farm attacks.”

He said the attack had been perpetrated by “three common gangsters motivated by their own self-interests”‚ adding: “I believe in the values that this country was built on‚ and continue to hope for harmony and peace. I am now doubly motivated to come into work every day‚ and will continue to ensure that I can contribute and try make even the smallest difference in my community.”

Stanley Edwards said: “Crazy! This man is such an inspiration to so many‚ including me.”

Abduragmaan Mohamed said only a small percentage of people were incapable of knowing the difference between right and wrong‚ and Heidi van Wyk told Back: “Your integrity and depth of character make me want to believe in a brighter future for all. Respect.”

Gladys George said: “I am very glad you are alive!! I am a resident on one of the neighbouring farms. May your recovery be speedy!! Thank you for you positive attitude‚ it is truly inspiring!!”

Police spokesman Sergeant Noloyiso Rwexana said the intruders stole electronic items and a gun. No arrests have been made.