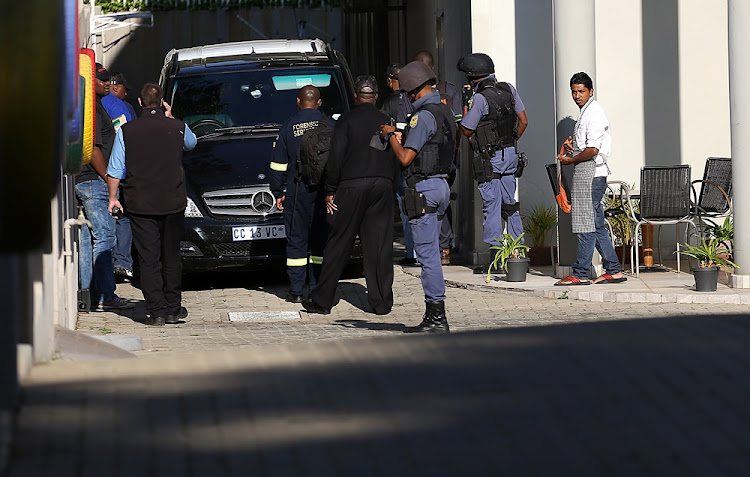 The Hawks have confirmed that three people have been arrested following operations at the Gupta family's Saxonwold residence in Johannesburg on Wednesday.

Hawks spokesperson Hangwani Mulaudzi would not immediately reveal the names of those arrested.

"Let's just say that it includes charges of fraud‚" he said.

It is believed that prior to raiding the Gupta residence‚ officers had raided a Bedfordview residence‚ believed to be that of a former MD of Sahara Systems.

Mulaudzi refused to comment on whether the two incidents were linked.

Reuters reported that the Hawks also raided the offices of the Guptas’ Oakbay holding company in Sandton on Wednesday morning.

According to a security guard who did not wish to be named, officers arrived in three vehicles around 7.30am and entered the building. They left shortly afterwards, the guard said.

Hawks raided the Gupta compound in Saxonwold, Johannesburg on February 14 2018.

Deal on the table?

Earlier, TimesLIVE reported that the embattled Gupta family was hoping to strike a deal with the Hawks.  News of the planned deals followed reports that President Jacob Zuma’s son and Gupta business associate Duduzane Zuma was to hand himself over‚ with his lawyers‚ to the Hawks on Wednesday.

Duduzane‚ in response to SMSs and calls‚ said he was in a meeting and could not speak.

He failed to comment on reports that he would hand himself over to the Hawks.

The raids are believed to be linked to last month’s preservation order which the Asset Forfeiture Unit obtained in relation to the Estina Dairy Farm project‚ at Vrede in the Free State.

The project was meant to be a lifeline to indigent farmers but saw millions of rand allegedly siphoned off to the Guptas.

The #GuptaLeaks reports revealed last year that at least R30-million paid to the Guptas via the farm ended up funding the family’s lavish Sun City wedding in 2013 - but this did not form part of Public Protector Busisiwe Mkhwebane’s probe. Mkhwebane said the Estina expenditure was being investigated by the Hawks.

In her report‚ she found that the Free State agriculture department had failed to manage and monitor implementation of the terms of agreement with Estina in relation to budget evaluation‚ expenditure control and Estina’s performance.

Mkhwebane directed Free State premier Ace Magashule to institute disciplinary proceedings against all implicated officials involved in the project and submit a report to the public protector on the action he would take once a disciplinary process had been concluded.

The embattled Gupta family is hoping to strike a deal with the Hawks this morning. This follows the Hawks raid on the Gupta family’s Saxonwold ...
News
3 years ago

The Gupta family are not having a happy Valentine's day, and the hawks swooped on their Saxonwold home in the early hours of Wednesday morning.
Politics
3 years ago

Events leading up to the Hawks raid on the Gupta family

Former public protector Thuli Madonsela‚ in her 2016 report on state capture‚ directed President Jacob Zuma to appoint a commission of inquiry to ...
News
3 years ago

As the country waits to see if President Jacob Zuma will resign, the Hawks launched a raid on the Guptas compound in Saxonwold. Follow all the live ...
Politics
3 years ago

Inside the Gupta home – officers describe the Hawks raid

Officers have described what it is like inside the luxurious Gupta home in Saxonwold‚ Johannesburg‚ which the Hawks targeted on Wednesday morning as ...
News
3 years ago
Next Article