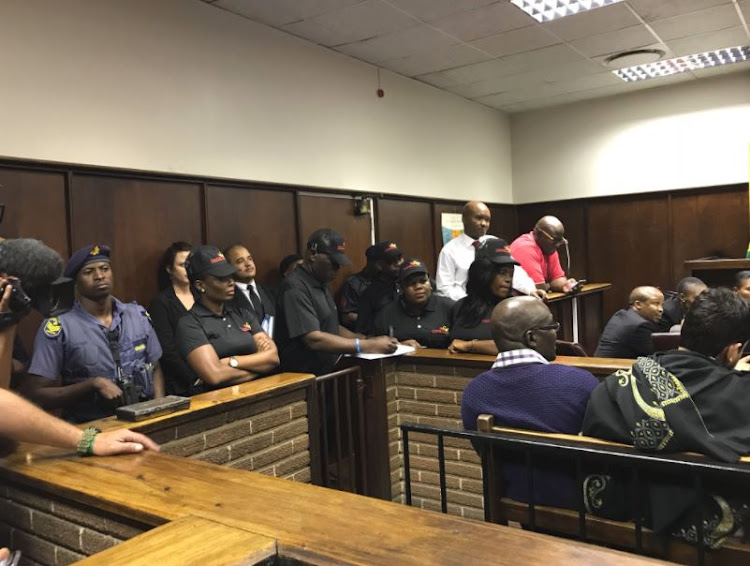 Bail has been granted to eight accused in the Estina Dairy Farm scandal case which has embroiled mining minister Mosebenzi Zwane and the embattled Gupta family.

Gupta is the nephew of the controversial Gupta brothers‚ Ajay‚ Atul and Rajesh - who are at the heart of allegations around state capture.

The 34-page indictment was presented in the Bloemfontein Magistrate's Court on Thursday‚ where the accused appeared under a heavy police guard.

Eight associates of the controversial Gupta family appeared in the Bloemfontein Magistrate’s Court on February 15 2018.

It painted a damning picture of how senior government officials allegedly planned and helped the Gupta family to swindle the state through the looting of public funds.

They were all granted bail under strict conditions they report to the police stations where they live twice a week‚ surrender their passports‚ not interfere with any witnesses and not leave the provinces where they reside.

Gupta‚ asked for comment as he walked back down to the cells‚ laughed and cracked a smile‚ while Howa and Chawla covered their faces.

The matter was postponed to August 17 for further investigation.

NPA spokesman Luvuyo Mfaka said they were confident of their case‚ “which we can prove beyond reasonable doubt”.

“We have the evidence‚ and a lot of it‚ to prove the case and allegations we are making.”

He said although bail was granted the NPA was satisfied that the accused would not flee.

“They all have properties and other ties to South Africa. They will remain here that is for sure.”

Gupta accused to apply for bail

Indications are that suspects in the R220-million Estina Dairy Farm corruption case will apply for bail on Thursday.
Politics
3 years ago

Five people have been arrested in connection with the investigations into the controversial Vrede dairy farm project.
Politics
3 years ago

The raids that have targeted properties owned by the Gupta family on Wednesday are related to an investigation by the Hawks into the controversial ...
News
3 years ago
Next Article