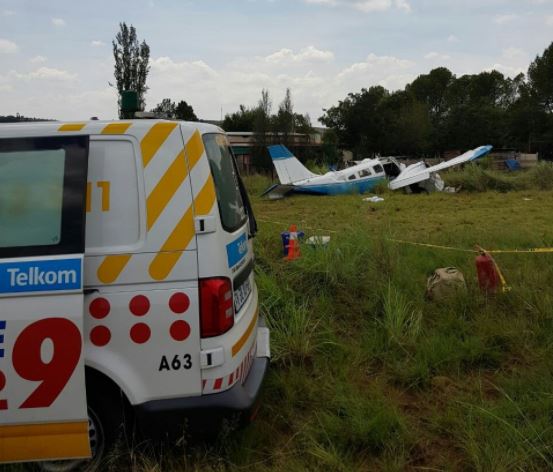 Five people were injured when a light plane crashed in Tshwane on 16 February 2018.
Image: Netcare911 via Twitter

Five people were injured when a small plane crash-landed in the Tierpoort area in Pretoria on Friday morning.

Netcare 911 said its paramedics attended to reports of a plane crash at 10.47am.

“Netcare 911 paramedics were first to arrive and reports from the scene allege that the plane crashed during the landing‚” its spokesman Shawn Herbst said in a statement.

A female passenger sustained a moderate to serious injury and analgesic medication was administered to manage her painful back injury.

Once stabilised‚ she was transported to hospital for further assessment and care.

Two men sustained relatively minor injuries and were transported by another ambulance service to hospital.

Two other men‚ one understood to be the pilot‚ remained on the scene.

Herbst said the police and the Civil Aviation Authority were called to the scene to investigate the incident.