One cop dies, another injured in Nyala crash while en route to protest 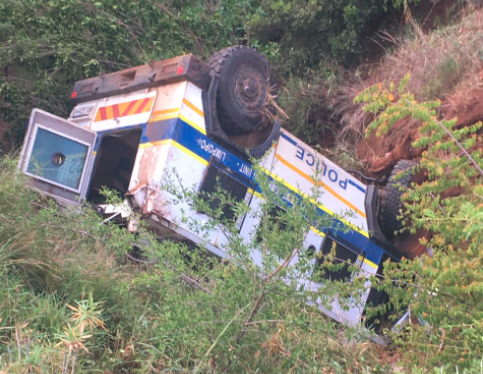 A police warrant officer was killed and a second officer injured on duty while on their way to the scene of a protest at a mine.
Image: SAPS

A police warrant officer was killed and a second officer injured when the Nyala they were travelling in left the R37 in Limpopo and plunged down an embankment.

The two public order policing (POP) unit members were on duty‚ on their way to the scene of a protest at a mine.

“It is alleged that the right front wheel of the vehicle got a puncture next to Malemang village outside Lebowakhomo. The vehicle swerved off the road and plunged into the adjacent donga‚ instantly killing a warrant officer who was the driver and seriously injuring another member‚ also a warrant officer‚” said police spokesman Brigadier Motlafela Mojapelo.

“On-the-scene counselling was also conducted to the other POP Unit members who stopped after witnessing what had just happened.”

The injured officer was taken to hospital.

Police in Lebowakgomo are investigating a case of culpable homicide.