Mcebo Dlamini to appear in court…for the 30th time 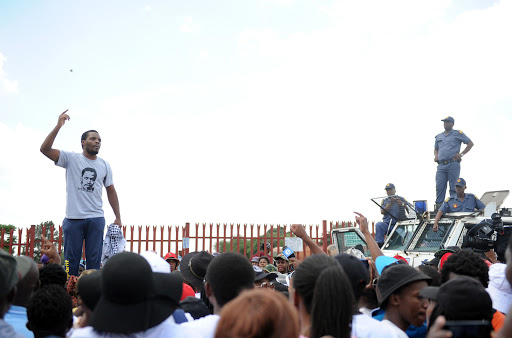 Student activist and #FeesMustFall campaign leader Mcebo Dlamini was on Tuesday expected to appear in the Johannesburg Magistrate's Court on charges linked to 2016 fee hike protests.

Dlamini took to Facebook on Monday night‚ stating that this would be his 30th appearance in court.

Tomorrow morning at 9am I will be appearing in Court for the 30th time still no trial. Joburg central magistrates court Court 10

“Still no trial‚” he said in the post‚ which included a picture of him being detained by two police officers.

He last appeared in January‚ when his case was postponed. Following that appearance‚ he posted on Facebook that he was “tired”.

In November‚ Dlamini told TimesLIVE that a plea bargain had been placed on the table by the State. It was not immediately clear whether he had agreed to accept the deal.

“The State proposed that we enter into a plea bargain. The case was then postponed to allow us to deliberate on the proposal‚” Dlamini said at the time.

He said the State gave his legal representative the evidence it had against him.

While the details of the proposed agreement have not yet been made known‚ Dlamini said if the defense and State failed to “find each other”‚ a trial date would be set.

The law student faces a string of charges‚ including theft‚ assault‚ public violence and malicious damage to property linked to student protests from October 2016.

He remains out on bail. According to him‚ he will appear in court 10 at 9am.

#FeesMustFall campaign leader Mcebo Dlamini will spend the December holidays with the AmaMpondo king in the Eastern Cape. He revealed this to ...
News
4 years ago

Student activist Mcebo Dlamini has accused prosecutors of failing to produce evidence against him.
News
4 years ago

The case against student activist and former Wits SRC president‚ Mcebo Dlamini‚ has yet again been postponed after he obtained a new legal ...
News
4 years ago