Schabir Shaik is too busy to go to jail 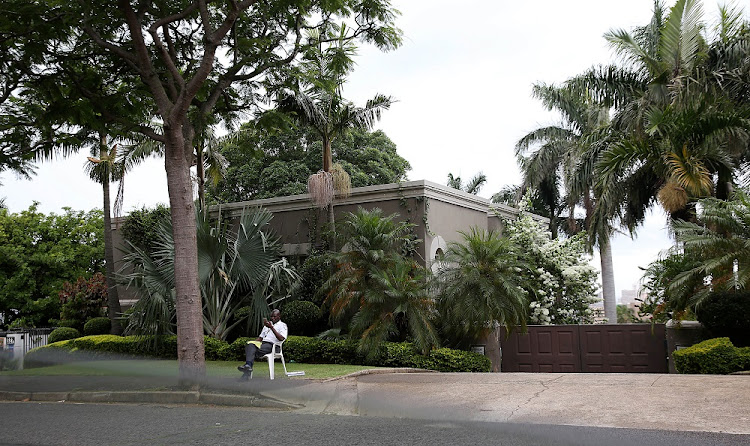 Schabir Shaik is not being hauled back to jail.

Instead the convicted fraudster is "very busy" at his Morningside home in Durban.

On Monday as hundreds of Twitter and Facebook users shared a hoax tweet claiming that he was going to be rearrested‚ the terminally ill parolee's schedule was full.

"He said he is very busy and you don’t have an appointment so he can't see you‚" the security guard stationed outside Shaik's home told TimesLIVE after consulting with his employer.

Hot on the heels of former President Jacob Zuma's resignation‚ the hoax tweet threw Shaik's controversial medical parole back into the spotlight.

Former president Jacob Zuma is set to face the music —  soon he will be charged with the arms-deal corruption case and he might face ill-discipline ...
Politics
3 years ago

@greg46011313 tweeted: "Schabir Shaik medical parole under investigation - arrests imminent. A Hawks insider has indicated that Shaik is likely to be arrested soon‚ as an invistigation [sic] into his medical parole revealed new information and that further arrests are most likely to follow."

But a Schabir Shaik parody account joked that he had been assured by his doctor that he will be dead before the budget speech on Thursday.

Hawks spokesman Brigadier Hangwani Mulaudzi on Monday said the crime-fighting unit had nothing to do with the tweet.

"I don’t know where it is coming from‚" he said.

The Department of Correctional Services said it was not reviewing Shaik's parole. "We have not received any formal correspondence with an aim to review the status of medical parole granted to Schabir Shaik in March 2009‚" said departmental spokesman Singabakho Nxumalo.

Jacob Zuma’s change in fortune, from a rape trial to election as ANC leader, was the beginning of a struggle in which he usurped the machinery of ...
Opinion & Analysis
3 years ago

The Health Professions Council of South Africa also said it had not received a formal complaint to investigate the doctors who had recommended that Shaik be granted medical parole.

Earlier this month a group calling itself Minorities of South Africa said it wanted the council to investigate if the doctors had acted ethically.

Shaik has served 28 months of his 15-year jail sentence for fraud and corruption. He served most of his sentence in the St Augustine’s private hospital and the Inkosi Albert Luthuli state hospital.

He was given parole on medical grounds after his doctors told the parole board that he was in "the final phase of a terminal disease". His doctors said he was also clinically depressed‚ losing his eyesight‚ had suffered a stroke‚ and would die from “severe” high blood pressure.

But‚ since then‚ he has been spotted shopping‚ dining at fancy restaurants and playing golf.

In April 2015 the parole board relaxed conditions "to accommodate his needs".

Shaik is allowed to work from 8am to 6.30pm from Monday to Friday‚ attend his son's school functions and a play a sport once a week.