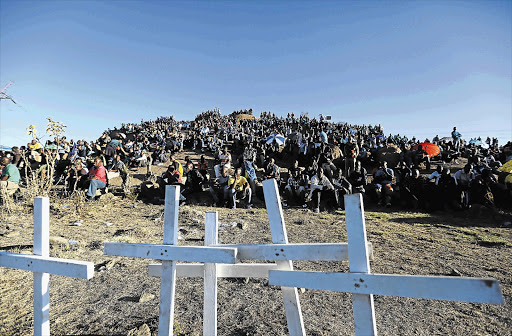 THE ANGER REMAINS: The commemoration of the massacre at Marikana.
Image: MOELETSI MABE

The Federation of Unions of South Africa says president Cyril Ramaphosa must ensure that his attempt to compensate the families of 44 miners who died during clashes with the police in Marikana 2012‚ is done with dignity.

Reacting to Ramaphosa's reply to the state of the nation address in Parliament on Tuesday‚ Fedusa general-secretary Dennis George said government needed to ensure that the families got closure.

"We welcome the announcement by the president to compensate those families of people who were injured and killed because it’s important that we close that chapter of our history. The Marikana Commission of Inquiry made its recommendations but I think for the families to get closure is something we really welcome as Fedusa. We really think it's necessary‚" he said.

George added that government needed to look back at what really transpired before the massacre‚ as some people were not accounted for.

A Marikana woman is living in fear after she was beaten and kicked by a man who lives in her street‚ allegedly for asking questions about R34-million ...
News
4 years ago

"We are also looking for a process… because some people were killed by the police and there were security guards and other workers that were killed before the Marikana incident happened when the police shot them. But I think all the victims of this particular incident must be given some sort of dignity because that is as open wound to all of us‚" George said.

"If you want to bring closure to the highest level of addressing this open wound right now‚ it's appropriate. But I think how you are going to do it and how you will bring the families together‚ that is another issue and I think we need to deal with that in a much sensitive manner‚" added George.

Meanwhile‚ the Association of Mineworkers and Construction Union‚ who have been at the forefront of calling on government to be held accountable for the loss of life‚ declined to comment on Ramaphosa's vow.

"We can’t react to that because the matter has been between the lawyers that represent the communities and the families who were massacred. At this point in time‚ I think he did mention that government is negotiating with lawyers so let's respect that matter because we are not lawyers‚" said Amcu spokesperson Manzini Zungu.

The clichè era is over; time for Ramaphosa to show us what he's got

For almost 10 years, all we had was words. Some, like "A better life for all", "100% for Zuma" and "fire-pool" were obvious, ludicrous lies.
Opinion & Analysis
4 years ago

On the afternoon of August 16‚ 2012‚ members of the South African Police Service (SAPS) killed 34 men at a Lonmin-owned platinum mine in the Marikana area in the North West province.

A large number of other men were also injured by SAPS gunfire on that afternoon. Between August 12 and 14‚ at least four miners‚ two police officers and two security guards died in the ensuing violence. At least 78 people were injured during the wildcat strike.

Ramaphosa was non-executive director at Lonmin at the time.

President Cyril Ramaphosa replied on February 20 2018 to the questions asked during the Sona debate. Here are the highlights.