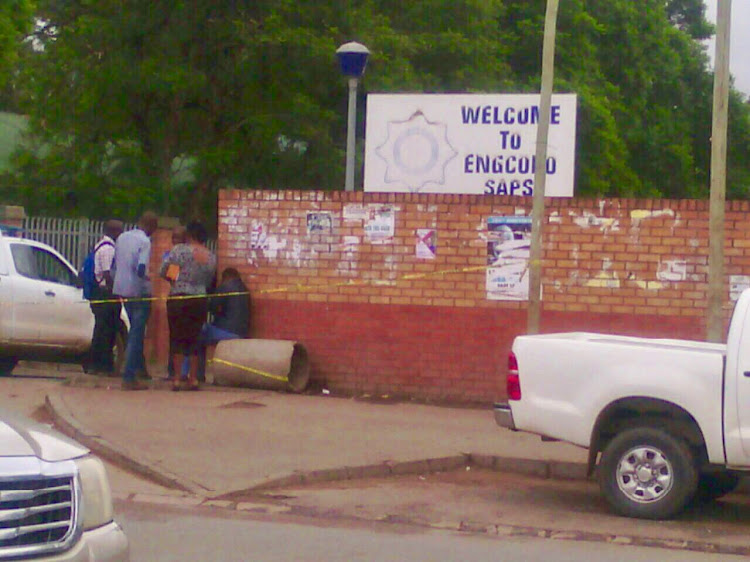 The scene outside the police station where a gang of gunmen shot and killed seven police officers and one soldier inside the Ngcobo police station.
Image: Thembile Sigqolana

The attack by robbers on the Engcobo police station is the second time that officers there have come under attack.

In March 2017‚ a Hollywood style stick-up took place just after midnight in the Eastern Cape town. An estimated 15 armed robbers had drilled their way into a Standard Bank in Ngcobo and shot at police‚ the police station and houses nearby.

The robbers allegedly tied up a security guard and got into the bank by cutting open an ATM with angle grinders. Police said the robbers took up positions all over the town and started firing at police when a police vehicle approached the scene.

The police returned fire and for a while only the rattling of the firearms was heard. One police officer was hurt and was rushed to hospital.

The robbers raced off in high performance vehicles including an Audi‚ BMW‚ a Toyota Fortuner and a Toyota Hilux.

Police officials were described as being left traumatised by the attack and were assured by the authorities that social workers would be sent to debrief them.

Other attacks on cop shops last year include:

March 2017: Thirty weapons were stolen from the Peddie police station. Eight firearms were recovered after police arrested suspects the following month. The gang broke into the police station’s strongroom through the roof to steal the firearms‚ which included R5 assault rifles‚ handguns and shotguns.

June 2017: A sergeant at the Lingelethu West police station in Khayelitsha‚ Cape Town‚ was shot in the face in the early hours of the morning by attackers who entered the police station under the pretext of reporting a robbery. The officer survived.

June 2017: Two constables were shot dead at the Koffiefontein Police Station in the Free State.

August 2017: Suspects broke into the Kimberley police station but only got away with clothing.

November 2017: A police officer was shot during an attempted robbery at the Elandslaagte police station near Vryheid in KwaZulu-Natal.

Last year‚ MPs discussed the possibility of CCTV cameras being installed at police stations and even the purchase of body cameras for front-line staff.

Nationally‚ the South African Police Service is concerned at the number of its officers who come under attack. In the 2016/17 financial year‚ SAPS statistics showed 57 police officers lost their lives. Thirty one of them were killed while on duty.

Over a 20-year review‚ the rate at which police officers are being murdered has fallen significantly‚ according to the latest South Africa Survey‚ published by the South African Institute of Race Relations (IRR). The survey found that the rate of police murders fell by 80%‚ from 252 per 100‚000 in 1994‚ to 51 in 2014.

As condolences are pouring in for the families of the slain police officers in Ngcobo‚ Eastern Cape‚ the ANC leadership in the province say that the ...
Politics
4 years ago