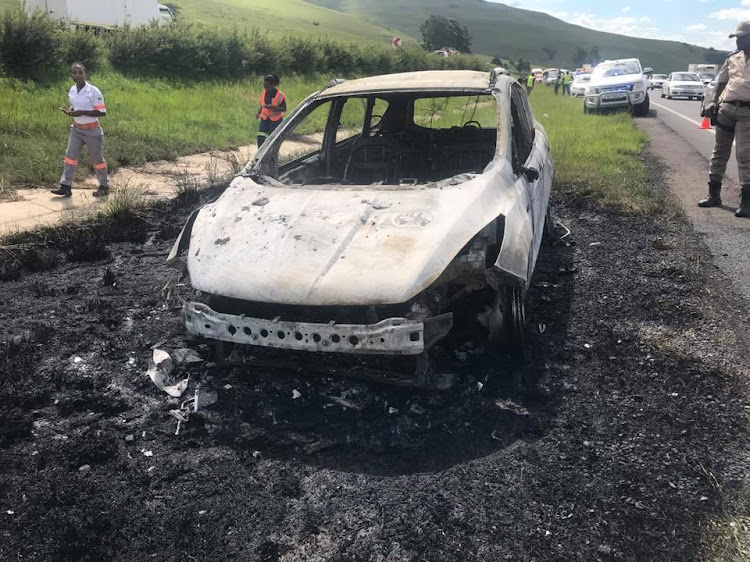 The charred aftermath: This Ford Kuga caught alight on a freeway in KwaZulu-Natal last week.
Image: Sissy Mkhwanazi via Facebook

This is according to a KwaZulu-Natal woman whose 2016 model vehicle suddenly caught alight last week‚ just seconds after she pulled over and jumped out as it started to give her trouble on the N3 highway.

“The minute I got out‚ the car locked itself and the mirrors caved in. I rushed to the back and quickly opened the boot and luckily it opened so I could get my bag‚” said Sissy Mkhwanazi.

Just before she had stopped‚ the vehicle had lost power. The brakes and accelerator had stopped working‚ forcing her to make her way from the fast lane to the slow lane at high speed. She heard what sounded like something bursting and swerved off the road‚ and then the car came to a halt.

A KwaZulu-Natal woman watched her Ford Kuga 2016 model vehicle burst into flames just seconds after she pulled over and jumped out as it started to give her trouble on the N3 south bound in Estcourt.

Mkhwanazi said she thought it may have been a tyre burst‚ although she couldn’t see or smell any smoke and couldn’t explain why she had lost control of everything except the steering wheel.

“I looked around at the back tyres and they were fine. As I headed to the front [of the car] to check‚ I saw flames on the bonnet. The flames were quite high because of the wind caused by passing cars on the highway‚” she added.

When reports of Ford Kugas catching fire emerged back in 2016‚ Mkhwanazi booked her car in to be checked‚ she said.

In January 2017‚ a Ford technician checked her vehicle and assured her that it had no faults. Now‚ she wants Ford to take accountability.

Mkhwanazi visited the Pietermaritzburg branch and was told they would investigate the matter. They have since offered her a courtesy car pending the outcome of their investigation.

“The car was to be delivered on Tuesday. I asked what car it was and I was told that it was Ford Kuga‚” said Mkhwanazi.

She lambasted Ford for what she said was a lack of empathy following her traumatic ordeal in the same vehicle.

“They later called me and offered me a Ford Everest instead but they are not taking full responsibility. All the people I have engaged with say they are not making promises or accepting liability. I really want help‚ not just for me but for other people who are still driving these cars‚” said Mkhwanazi. 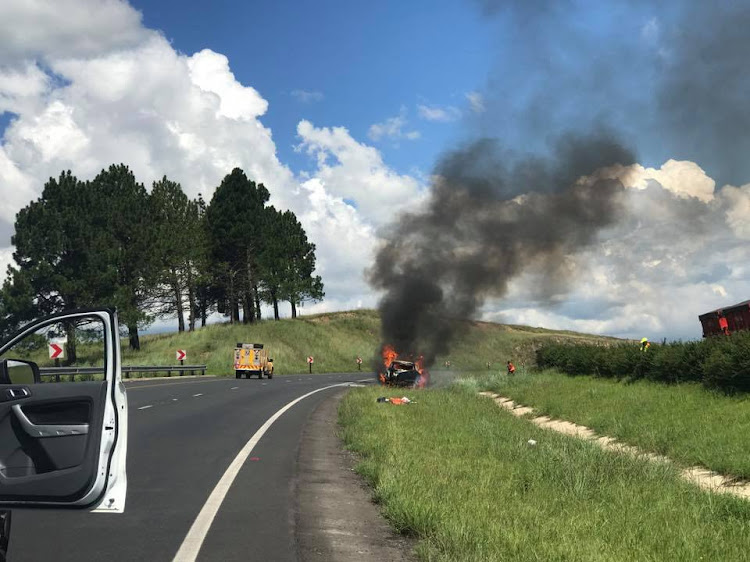 “It is a time bomb. It compromises road safety not just for the owners but other road users too‚” she added.

Last month‚ TimesLIVE reported that the global motoring giant was is offering to settle the bank loans of Kuga owners whose vehicles have either caught alight or malfunctioned.

The company had been accused of trying to squash a class action lawsuit but the company says such offers are standard practice.

The settlement offers come with a catch - owners who have been approached by Ford have to sign a non-disclosure agreement with the company.

In January‚ six Kuga owners had taken up the offer.

To date‚ Ford has implemented three safety recalls on the Kuga.

Between November 2015 and December 2017‚ 72 Kugas were reported to have caught fire on South Africa's roads. Of the 72‚ six either caught alight or sustained engine and electronic failures after undergoing the recalls. The owners of the six vehicles have had their bank repayments settled by Ford.

Lawyer Rod Montano‚ who was handling the class action law suit against Ford‚ at the time accused the company of using the settlement offer to kill any legal action.

He said he believed the offer was malicious as it was designed to prevent any further faults with the Kuga from entering the public domain and coming to the attention of the relevant authorities.

Ford spokesman Mines Bhagaloo said at the time the non-disclosure agreements were to "to respect our customers' confidentiality".

"There is nothing unusual about this and it is in accordance with best practices and the rule of law that enjoins us to protect information which includes personally identifiable information."

Global motoring giant Ford is offering to settle the bank loans of Kuga owners whose vehicles have either caught alight or malfunctioned.
News
3 years ago

For two years Renisha Jimmy has been waiting for global car manufacturer Ford to answer for her brother’s death.
News
3 years ago

Ford has enraged customers who have been billed for repairs on their problematic luxury Kuga SUVs.
News
3 years ago