'Prophet of Doom' to hear his sentence today 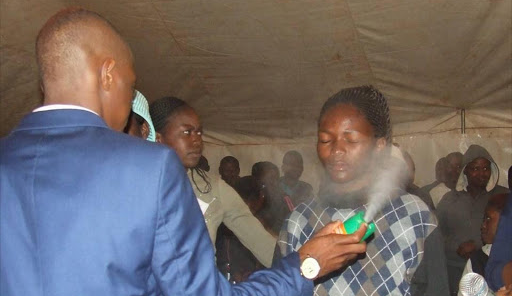 Prophet Lethebo Rabalago, who sprayed Doom in the faces of his followers, was found guilty of assault.
Image: Facebook/MZGA

Convicted 'prophet of Doom' Lethebo Rabalago‚ 25‚ who sprayed his congregants with pesticide‚ will know his fate today.

Mookgopong magistrate Frans Mahodi said Rabalago's matter has dragged for too long and that he was ready to deliver his sentence today.

The state wants the controversial Limpopo prophet to be fined R60,000 for contravening the Stock and Agricultural Remedies Act 36 of 1947‚ which deals with pest control operators. This after he sprayed Doom in his congregants' faces from close range in an apparent bid to "heal" them.

Prosecutor Chris Maruma submitted that the state wants Rabalago to be fined R20,000 for each of the three counts and wants him behind bars for three years on each count of assault with intent to do grievous bodily harm.

Maruma said Rabalago did not know show genuine remorse throughout the court proceeding. The state also wanted the court to declare Rabalago unfit to posses a firearm because of the violent manner he had shown when spraying his congregants.

Rabalago's lawyer Edmond Lubusi said his client was a first-time offender and asked the court to show mercy when imposing a sentence.

'Prophet of Doom' asks to serve his sentences concurrently

The convicted Lethebo Rabalago‚ 25‚ popularly known as the 'prophet of Doom'‚ wants the sentencing on three counts of contravention of the Stock and ...
News
4 years ago

The mother of convicted Limpopo prophet Lethebo Rabalago‚ also known as the "Doom Pastor"‚ has told the Mookgopong Magistrate' s Court that she will ...
News
4 years ago

Abusive pastors should know: all will be disclosed

Today we report on a sickening scandal involving a bishop who preys on his female congregants, some of whom have accused him of rape. Others say he ...
Opinion & Analysis
4 years ago

A reasonable viewer would not be offended by advertisements depicting sangomas‚ prophets and evangelists who promise to “kill the evil spirit of ...
News
4 years ago