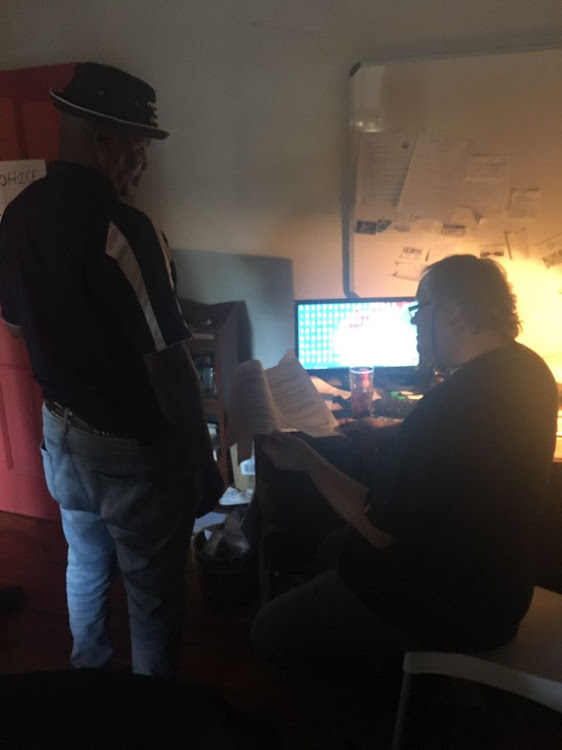 Police go through documents with Jacques Pauw during a raid on his Western Cape home on Wednesday night.
Image: Samantha Pauw

A search and seizure warrant obtained by anti-terrorism police shows authorities believe that Jacques Pauw, author of the bestselling book The President's Keepers, is in possession of secret intelligence documents.

The warrant, obtained by TimesLIVE, provides a glimpse into the investigation the Hawks' Crimes against the State Unit is conducting into Pauw.

The document, signed off by Malmesbury magistrate J Jantjies earlier on Wednesday, shows that the raid on Pauw's Western Cape home in Riebeek-Kasteel was conducted on the basis that police believe he has violated the apartheid-era Protection of Information Act and the Intelligence Service Act.

Pauw, speaking from his home, said the officers from unit, which usually investigates terrorists, searched his home, guesthouse and restaurant.

.@TimesLIVE video of Hawks Crimes Against The State Unit officers raiding author Jacques Pauw’s home and restaurant. The raid was over alleged state intelligence documents he is said to have had possession of for his boom The President’s Keepers. Video: Samantha Pauw pic.twitter.com/DaQT1moWhu

He said the officers were "not serious at all".

"The police didn’t take our phones. They said they were merely doing their jobs.

"One must realise that some senior officer gave them the instruction to do this, which is ridiculous. I didn’t expect this to happen after [Cyril] Ramaphosa  became president, which is worrying," he said.

The warrant states that according to the contents of the book, Pauw received secret documents and information, "that belongs to the State Security Agency of the RSA knowing, or having reasonable grounds to believe, that such documents or information was being disclosed to him in contravention of the Protection of Information Act between August 2016 to date.

"Jacobus (Jacques) Pauw disclosed classified information or material entrusted to him by member(s)/former member(s) of the State Security Agency (SSA) of the RSA without the permission of the director-general in contravention of the aforesaid Act, and it is unlawful."

The warrant outlines how police were searching Pauw's home to seize "software/copy or manuscripts used to [produce] the book The President's Keepers; computer(s) or laptop(s) or electronic item(s)/object(s) used/contains evidential material; or any hard or soft instrument(s)/machine(s) related to the production of the book".

It shows that police are also wanting to seize any notes or documents containing information related to the book and any material related to the alleged offences that Pauw allegedly committed.

Pauw’s bombshell book revealed details of the tax affairs of former president Jacob Zuma, including that he was paid a R1-million a month salary for at least four months after he became president in 2009 by a company owned by controversial Durban businessman Roy Moodley.

In book, Pauw paints a damning picture of the corrupt cabal that helped Zuma gain power and then kept him there.

Pauw is being taken to court by the South African Revenue Service, which is seeking to have the courts declare that he contravened confidentiality clauses in the Tax Administration Act by publishing information over Zuma’s tax affairs. 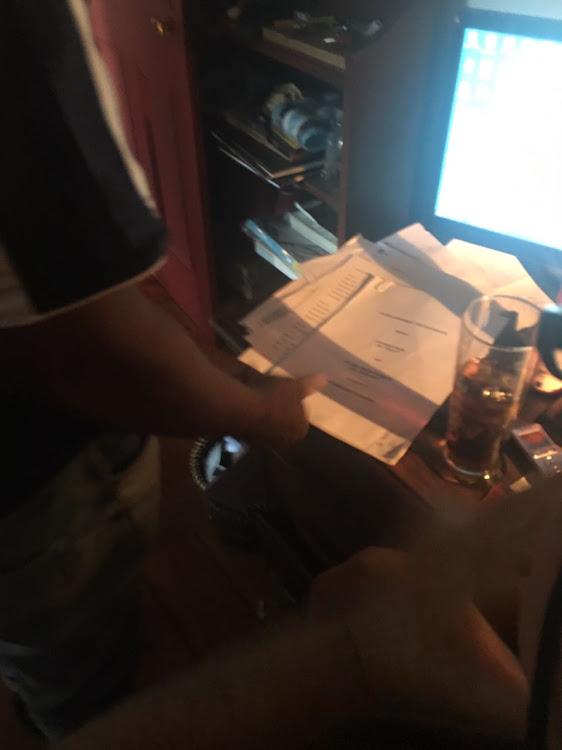 A police officer goes through documents during a raid on Jacques Pauw's house on Wednesday.
Image: Samantha Pauw

In December, Durban-based SAPS Colonel Reuben Govender summoned Pauw and News24 investigative journalist Pieter Louis-Myburgh to a Durban police station to answer questions over the contents of the book and reports Myburgh wrote.

Govender was later removed as the investigating officer.

“We condemn this jackboot move in the strongest of terms and stand by our author and the right of the South African public to know how our law enforcement agencies go about their business. The President's Keepers brought to light abuse of and corruption at these agencies, and this raid is evidence of how the priorities are perverted.

“They are choosing to shoot the messenger rather than investigate what Jacques Pauw has revealed in his book,” the publisher said.

Pauw also revealed how a slush fund at the SSA had been looted and implicated current SSA director general Arthur Fraser in the misappropriation of funds. He also accused Fraser of paying family members for information after registering them as informants.

Fraser and his family have vehemently denied this.

Media Monitoring Africa has set up a fund to assist journalist Jacques Pauw with his legal battles.
News
4 years ago

Books are back. That’s the verdict of retailers after a year that saw rising sales driven by real-life political drama.
Lifestyle
4 years ago

The South African Revenue Service has now landed itself with a much bigger problem than dealing with a potential leak of confidential taxpayer ...
Ideas
4 years ago

Pauw to oppose SARS application that he contravened tax laws

Journalist Jacques Pauw says he will oppose an application by the South African Revenue Service (SARS) in the Western Cape High Court over his ...
News
4 years ago