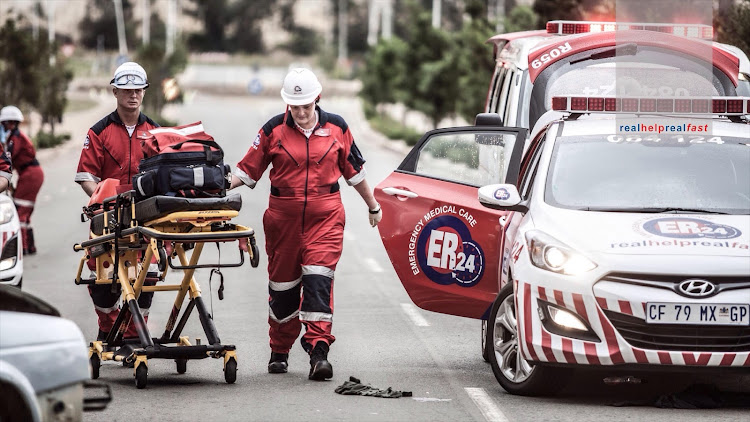 The tail of the aircraft was found approximately 150 metres away‚ according to ER24 paramedics who‚ along with other services‚ arrived on the scene.
Image: ER24

A small‚ wrecked helicopter in the middle of an open field along an un-named road in Delmas bore silent testimony this afternoon to a crash in which two men were killed.

The tail of the aircraft was found approximately 150 metres away‚ according to ER24 paramedics who‚ along with other services‚ arrived on the scene.

The two men were found lying in the wreckage. They had already succumbed to their injuries and were declared dead on the scene.

"The exact details surrounding this incident are not yet known but the relevant services are on the scene and will be investigating further‚" said ER24's Russel Meiring.

Five people were injured when a small plane crash-landed in the Tierpoort area in Pretoria on Friday morning.
News
3 years ago

One cop dies, another injured in Nyala crash while en route to protest

A police warrant officer was killed and a second officer injured when the Nyala they were travelling in left the R37 in Limpopo and plunged down an ...
News
3 years ago

Several people were seriously injured in an 18-car pile-up on the N1 outside Johannesburg on Saturday morning.
News
3 years ago