Cops want half a million rand - each - from Mbalula 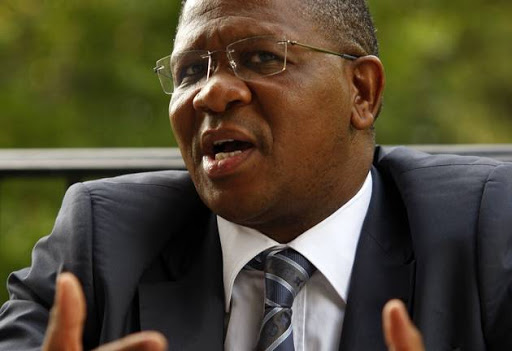 Three senior officers are demanding an amount of R500‚000 each from former police minister Fikile Mbalula‚ whom they accuse of defamation‚ according to the South African Policing Union (Sapu).

"As a caring union we have assembled a team of legal eagles to take on Mbalula‚" Oscar Skommere‚ Sapu's general secretary‚ said in a statement on Thursday.

Mbalula has recently been reshuffled out of cabinet‚ to become the ANC's head of elections.

"His ghosts will follow him to wherever he is‚" said Skommere.

"He might feel he was doing well in the police. However‚ his reckless‚ irresponsible and rude language in front of television cameras was totally unacceptable."

In January‚ the then police minister apologised and blamed a junior after being called out by Sapu over a remark published on his official Twitter account.

The ANC on Wednesday confirmed that the former minister of police Fikile Mbalula had been redeployed to Luthuli House with immediate effect.
Politics
4 years ago

The tweet related to an announcement that two police station commanders on the West Rand had been replaced‚ during a visit to the area by the minister to address community protests over criminality. At the time‚ the union gave Mbalula 24 hours to retract the statement‚ "as it defames our members".

"The Minister agrees with SAPU that the content of the tweet referred to is regrettable‚" Mbalula's office said in a statement at the end of January. "The tweet was written by Ministry Communications aide during and at the same time as the Minister’s speech to community - regrettably the tweet did not correctly capture the Minister’s statement (that) . . . the instituted rotation (of officers) should not be seen as apportioning any guilt . . .".

The statement continued: "After being alerted to the tweet‚ the Minister has since removed and deleted the said tweet and wishes to send a clear apology to the officers concerned. The Minister has no evidence of wrongdoing by the officers. The aide has been accordingly counselled."

Ten ministers and three deputies who served under former president Jacob Zuma have been axed.
Politics
4 years ago

On Thursday‚ however‚ Sapu said: "As much as former Minister Mbalula apologised and the officers accepted his apology‚ the injury to their names was already done."

Without providing details‚ Sapu said: "As much as he and the national commissioner reached an out of court settlement with the senior officers‚ the litigation process is a different ball altogether."

"We are suing Mbalula in his personal capacity."

Despite the large sums at stake‚ Sapu said: "This is not about money‚ it is about the personal injury of the good name of our members."

"By taking Mbalula to the cleaners‚ Sapu want to warn other senior managers and the political leadership of the police that we will never allow them to use our members to score cheap political points."