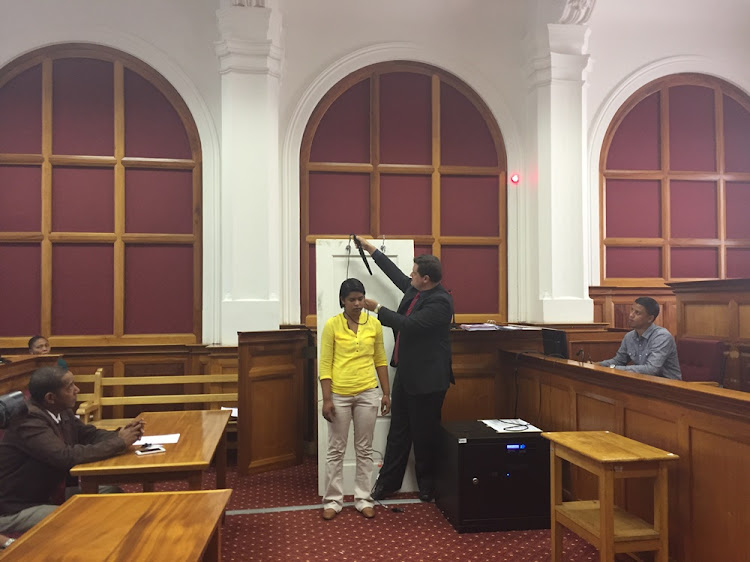 Colonel Danie Poolman demonstrates to the High Court in Cape Town his view that the ligature marks should be on the front of the neck as the cord pulls the neck from behind, March, 1 2018.
Image: Supplied

“When I looked at photographs and the tool‚ I questioned how did this person hang herself with this cord.” This question plagued Danie Poolman‚ head of engineering subsection forensics‚ as he testified in court on Thursday when the evidence of the crime scene of Susan Rohde's death was presented to him.

“As the cable hangs here it does not correspond with how the body was found‚” Poolman said. “I was informed that the top part of the tool was tied to the hook and the bottom part tied around the neck.”

Poolman explained to the court that since the cord of the hair tool is 3 metres in length and 5mm in thickness‚ it would only break in a double strand at 77kg. Susan weighed 52 kg.

According to the Spier maintenance man who discovered her body in the bathroom she was hanging from a single strand. “There was no section that was overly stretched or deformed. I could not see any failure on the internal structure (of the cord) on X-ray either‚” said Poolman.

'How I untied electrical cord from Susan Rohde's neck'

A maintenance man at Spier wine estate in Stellenbosch has demonstrated the moment he found Susan Rohde dead in her hotel bathroom.
News
4 years ago

Poolman conducted various strength tests on the cord to determine at what weight the cable would start to fail.

Poolman indicated that he was also concerned with the direction of the ligature marks around the victim's neck. He said that the marks around her neck did not correlate with what would be a suicide.

Poolman will be cross-examined by the defense on March 15.