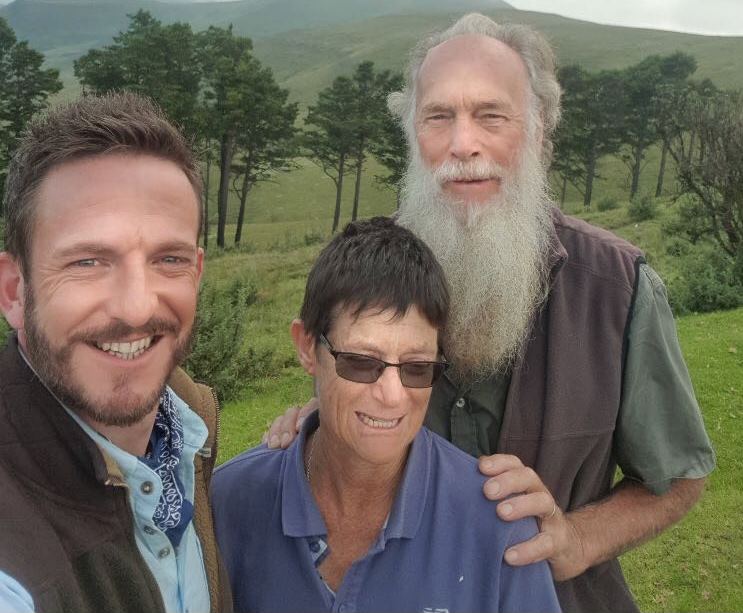 Horticulturalist and BBC presenter Nick Bailey posted this selfie with British couple Rod and Rachel Saunders on February 8. The couple have since gone missing in a case linked to terror group Isis.
Image: Nick Bailey via Twitter

A trio accused of the kidnapping of Britons Rod and Rachel Saunders appeared in the dock together for the first time in the Verulam Magistrate’s court on Thursday.

The three are alleged to have kidnapped the prominent botanists while they were travelling in the northern reaches of KwaZulu-Natal.

Patel‚ her face obscured by a niqab‚ stood close to Del Vecchio who had a bookbag‚ with a Koran inside it‚ slung over his shoulder.

The matter was adjourned until next week for a formal bail application.

The Saunders‚ of Kenilworth in Cape Town‚ remain missing.

The court heard on Wednesday that cell phones stolen from the abducted couple‚ which were found in the possession of Xulu‚ are expected to help police decode the circumstances around their kidnapping.

Large sums of money drained from account of missing couple

Cell phones stolen from abducted Britons Rod and Rachel Saunders - found in the possession of Eshowe teenager Themba Xulu - are expected to help ...
Politics
3 years ago

A fourth man has been questioned in connection with the kidnapping of Britons Rod and Rachel Saunders.
News
3 years ago

Since the pair went missing‚ R734,000 was drained from their accounts and their car‚ a Toyota Land Cruiser‚ was found dumped with a large amount of human blood inside.

Patel and Del Vecchio remain at the centre of the high-level probe‚ facing charges related to terrorism.

They are alleged to have contravened the Protection of Constitutional Democracy Against Terrorists and Related Activities Act by hoisting an Isis flag at Ndlovini Reserve.

Del Vecchio faces a second count for his involvement in “extremist” web forums.

He is “connected with terrorist activities by participating in extremist web forums that support Isis and offering to supply phone numbers and sim cards that are not traceable”‚ the charge sheet reads.

The kidnapping prompted the British government to post a travel advisory‚ detailing the threat of terror attacks on foreign interests in South Africa.