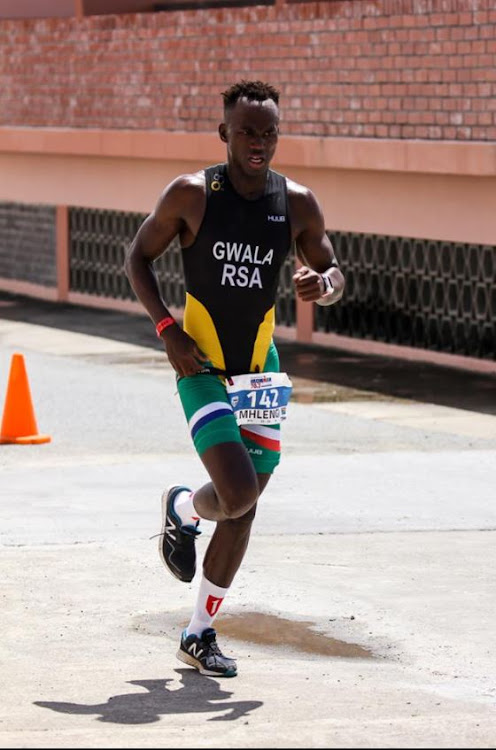 A target of R100‚000 has been posted on the BackABuddy website‚ titled "Get Mhlengi back on his bike."
Image: Ironman South Africa

Generous South Africans are starting to dig into their own pockets to help promising triathlon competitor Mhlengi Gwala pay for the medical treatment he requires after a gruesome attack by handsaw wielding criminals.

A crowdfunding initiative was announced on the Ironman South Africa Facebook page‚ as the organisation expressed its sadness at the attack on the triathlete‚ while sending him "best wishes and a speedy recovery".

Offers of help were shared on the group.

A target of R100‚000 has been posted on the BackABuddy website‚ titled "Get Mhlengi back on his bike".

"We are hoping to raise funds to support him with all his medical expenses‚ transportation‚ bike replacement and rehabilitation costs. We want to see him back on his bike!‚" JP Valverde asked supporters.

A Kyalami resident also urged South Africans to help Gwala‚ commenting: "He is going to need all our support to overcome this ordeal. Let's pull together and get him the fund's he needs for rehab‚ transport‚ counselling‚ and getting him back to international competition. Please share!"

While police are today still hunting for the three men who attacked Gwala‚ the 27-year-old athlete is on strong medication to manage the pain and scheduled for surgery.

A personal message to the athlete has been shared on Facebook by Nathalie Asensi-Verdu Crawford.

"Mhlengi Mhle Gwala ... you have lots of people praying you my boy! A gentle soul you are - what happened to you is not right and justice will be served! Seeing you lying in the hospital bed broke my heart but I know you will fight to recover... see you soon x x."

Correction: This article originally stated that a chainsaw was used in the attack. It has since come to light that the weapon was a handsaw.

Police are searching for three men believed to be linked to the brutal handsaw attack on South African triathlete Mhlengi Gwala.
News
3 years ago

South African triathlete‚ Mhlengi Gwala‚ was attacked by handsaw-wielding robbers while training in Durban on Tuesday‚ a friend has revealed.
News
3 years ago