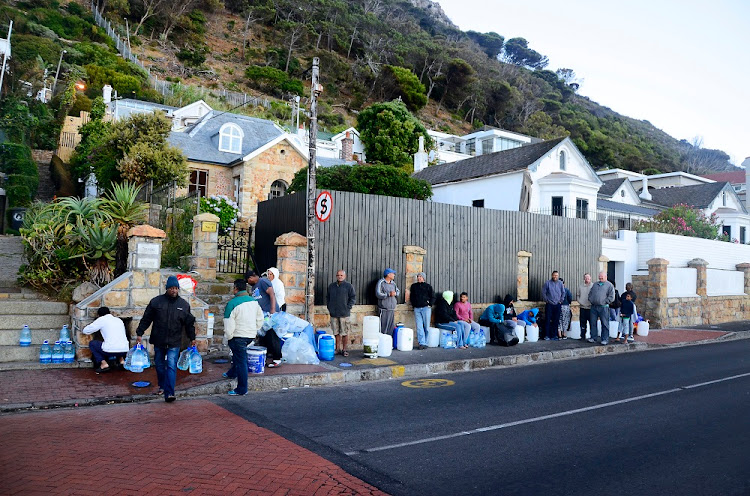 It took near panic to get Cape Town residents to slash water consumption by more than half‚ but it worked. The dreaded Day Zero will not come this year.

DA leader Mmusi Maimane told a media conference on Wednesday the City of Cape Town would even consider relaxing water restrictions from level 6b to level 5‚ depending on the winter rainfall.

Maimane and Cape Town deputy mayor Ian Neilson pleaded with residents to stick to the 50-litre-a-day restrictions‚ and Western Cape premier Helen Zille said if the Western Cape experienced a fourth year of drought‚ the situation “would be very serious indeed”.

Cape Town running dry - here are 19 other cities at risk

For now‚ though‚ it seems the city is successfully navigating its worst drought. Said Maimane: “The significance of this effort cannot be overstated. The sustained dedication and fortitude of all residents is the primary reason for this. You are all Day Zero heroes.”

A prevailing high pressure system — the same type of weather system that caused the extreme dry and hot conditions which led to the formation of the Great Karoo — has shifted southwards and experts believe Cape Town‚ like many other Mediterranean-climate cities around the world‚ is becoming a desert.

The MEC for local government‚ environmental affairs‚ and development planning‚ Anton Bredell‚ said the future was daunting but exciting.

“ ‘How are we going to reach sustainable cities?’ is a critical question which every mayor has to answer for themselves now‚” he said.

“We had an energy crisis‚ now we’re in a water crisis‚ the next crisis is a garbage crisis. How do we get ahead of this wave of crises? The answer is good planning‚ investing in our engineering sectors‚ because we are going to have to start thinking differently about these things.”

Several municipalities had faced water crises recently‚ including Mossel Bay in the southern Cape‚ which almost ran out of water in 2010.

“But now that it hit a city‚ suddenly people got the message that the resource is under pressure and the resource is limited. Previously we couldn’t get that message across‚” said Bredell.

Previous marketing campaigns to save water achieved successes of no more than 8%‚ while Cape Town had cut consumption by 60%.

Planning systems would now have to change completely so cities used water efficiently. “We’ve been flushing clean drinking water down the toilet for how many years?” said Bredell.

Plastic now covers many fields across the province as farmers seek alternative means of growing crops that are not so reliant on traditional irrigation. And corn fields have turned from gold and green to brown and barren.

But the change in climate is not just meteorological. Politically‚ a water crisis is a dangerous place to be‚ as Cape Town mayor Patricia de Lille found when a damning report about her management of the crisis led to the DA federal executive removing her from managing the drought response.

It also became the pinnacle of a massive fight between city officials which might still cost the mayor her job.

Officials had to deal with the prospect of military personnel protecting 200 distribution points in a Day Zero scenario – which at one stage was only three months from materialising – and the possibilities of civil unrest and water theft in a city which faces crime challenges that the beleaguered police service is unable to address.

Bredell said the national government failed to deliver on projects it promised to implement last year‚ such as providing funding for heightening the Clanwilliam dam wall to increase its capacity.

“Worldwide‚ 120 cities are wrestling with the same problem. As we stand here there is a task team from the province looking at Sydney‚ Melbourne‚ and Perth to see what they did right and what they did wrong‚” said Bredell.

“I foresee that other cities will come to learn from us.”

In the Day Zero panic, the City of Cape Town is drilling for water in areas that critics say will yield little, threaten the future supply and ...
News
3 years ago

The world has made tremendous progress in bridging the gap between water supply and demand.
News
3 years ago
Next Article