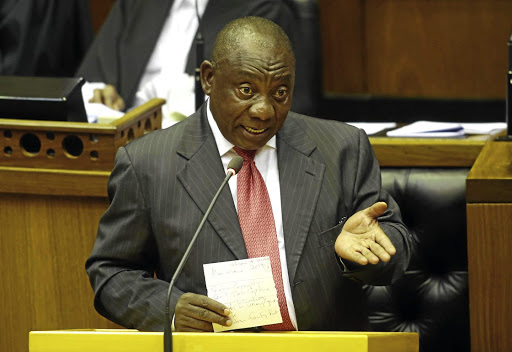 President Cyril Ramaphosa on Wednesday held discussions with Moody’s on the various initiatives under way to accelerate the country’s economic growth and create jobs.

At the meeting‚ which comes just two weeks before Moody’s is set to announce its latest outlook on South Africa‚ Ramaphosa also reaffirmed that accelerated land reform would unfold within a clear legal framework and without negatively affecting economic growth‚ agricultural production and food security.

Moody’s is a provider of credit ratings‚ research and risk analysis.

This was the first time that the agency had interacted with Ramaphosa since he was elected the country’s president last month.

Ramaphosa’s meeting with Moody’s follows one that newly-appointed Finance Minister Nhlanhla Nene had with the ratings agency on Monday‚ when he outlined government’s economic and fiscal plans.

The Presidency said that in the meeting at Tuynhuys in Cape Town‚ Ramaphosa described the new mood of hope‚ renewal and unity in South Africa - and the enthusiasm of its people to contribute to change and development.

“President Ramaphosa said this new enthusiasm was anchoring all efforts to confront the challenges facing South Africa‚ including government’s initiatives to increase investor confidence and reduce policy and regulatory uncertainty‚” the Presidency said in a statement.

It said fresh consultations on the Mining Charter‚ recent measures to strengthen Cabinet‚ changes in the board and management of Eskom and an inquiry into state capture formed part of government’s invitation to investors to come to South Africa.

He also said job creation was government’s most important priority and failure to create such opportunities constituted the greatest risk to the country.

Moody’s is due to announce its latest outlook on South Africa on March 23.

In November last year‚ Moody’s placed South Africa’s long-term foreign and local currency debt ratings of ‘BAA3’ (one notch above junk status) on a 90-day review for a downgrade.

Nene: Too early to say if Gigaba's budget will stave off downgrade

South Africa may have a new finance minister soon following the replacement of its president, but whoever replaces Malusi Gigaba will still face a ...
Business Times
4 years ago

If this week's budget marks the bottom of the slide in the country's fiscal position, the best case scenario for a return to investment grade by the ...
Business Times
4 years ago