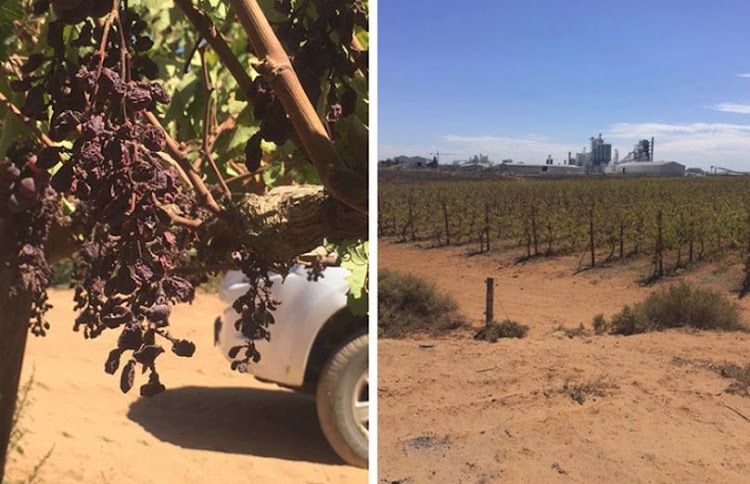 As a result of higher temperatures and less water, Nico Greeff’s grape farm, Begin Boerdery, is producing 60% of its usual crop.
Image: Nico Greeff via GroundUp

Ravaged by the ongoing drought‚ Nico Greeff‚ a grape farmer in Vredendal‚ says he will make no profit this season.

He has employed 30 fewer seasonal workers and‚ depending on rainfall this winter‚ may have to retrench permanent staff.

Greeff is chairman of the Olifants River Table Grape Producers’ Association and a director of the South African Table Grape Board. His farm‚ Begin Boerdery‚ is one of the suppliers for Namaqua Wines.

“We will produce 400 tons less grapes than the usual 1‚000 tons this season. All our grape varieties are down by 40%‚ our currants are down 70%‚ and together with the reduction in raisins this means a total loss of R5-million for the farm‚” said Greeff. “We will make no profit this season.”

According to the Western Cape Department of Agriculture‚ grape farms are one of the biggest sources of agricultural employment in the Vredendal and Clanwilliam areas.

Greeff said he had employed “around 30 fewer seasonal workers” this season. He said that while he has not laid off any permanent staff at the farm‚ “it might be a consideration‚ depending on how much rainfall we get this season”.

The drought has halted economic growth in the Western Cape‚ finance MEC Ivan Meyer said in his budget speech on Wednesday.
News
3 years ago

“I grew up on the farm. I’m 60 years old now. I don’t remember a year where the Olifants River didn’t flow. It’s standing still. Farmers are now putting in pumps to get water‚ but it is very salty.”

Greeff said that Citrusdal‚ which lies 130 kilometres up the Olifants River and is a centre of citrus farming in the Western Cape‚ would not be as hard hit by the drought as Vredendal.

“Citrusdal has better groundwater‚ that is not as salty as ours‚ and it also has better soil quality.”

Alwyn van der Merwe‚ a farmer in Citrusdal and chairperson of the Citrusdal Agriculture Association‚ said that while water conditions were a bit better for farms higher up the Olifants River‚ farmers in Citrusdal still had to be much more selective about their planting than before.

A 2016 report by the Department of Agriculture‚ Forestry and Fisheries (DAFF) Directorate of Statistics and Economic Analysis states that 286‚004 hectares of land in the Western Cape is used for orchards. This is more than in any other province in South Africa.

Indications were that the provincial deciduous fruit harvest this summer would be 20% smaller.

“This means less seasonal workers will be employed‚ and for a shorter period of time‚” she said.

Van der Merwe said that while many seasonal workers might not get employment for the season‚ “the Rooibos farming sector should absorb some seasonal workers as Rooibos grows well in dry conditions”.

Regarding his own employees‚ Van der Merwe said he only had permanent staff and would do everything he could to keep them employed.

Elaine Fredericks‚ 24‚ is a seasonal farm worker who has worked in Ceres since 2012.

“I help my dad‚ who also works on the farm‚ as he is the sole breadwinner in the house.”

She said two of her fellow seasonal farm workers had not yet managed to secure employment this season.

Bianca Capazorio‚ spokesperson for the Western Cape’s Ministry of Economic Opportunities‚ said the department was working to connect farm workers at risk of losing their jobs with the Department of Social Development‚ “to ensure that they are able to access social assistance”.

Capazorio said: “We have so far contributed R5-million towards the augmentation of water in the Matzikama municipality (of which Vredendal is a part) for the agricultural sector through the drilling of boreholes.”

Greeff said farmers in Citrusdal had first pick of the water from the Olifants River before it flowed down to Vredendal‚ and this made it even tougher for Vredendal farmers.

“We have invested Western Cape Government funds in fixing leaks in the Clanwilliam Dam canals to ensure that water is able to reach farms downstream‚” said Capazorio.

The dam lies on the Olifants River between Citrusdal and Vredendal.

“Conservation agriculture has been implemented at farms across the province‚ enabling farmers to achieve far greater yields with lower water usage‚” said Capazorio.

Conservation agriculture involves diversifying crops and planting crops that use less water‚ such as berries‚ cherries and pomegranates.

After DA leader Mmusi Maimane’s announcement on Wednesday that Cape Town had been saved from Day Zero‚ you might have thought citizens would be ...
Politics
3 years ago

It took near panic to get Cape Town residents to slash water consumption by more than half‚ but it worked. The dreaded Day Zero will not come this ...
News
3 years ago