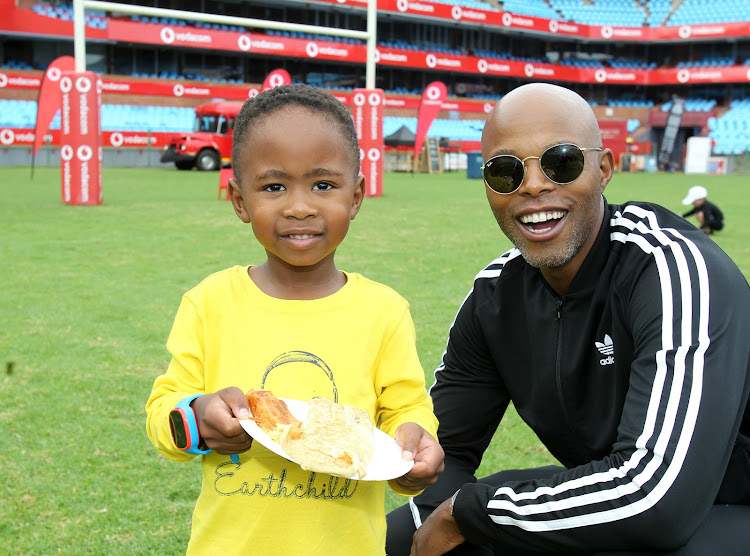 Thapelo Mokoena and his son, Lereko, at the Father-Son Sleepout hosted at Loftus Versfeld Stadium this past weekend.
Image: Supplied

Actor‚ filmmaker and television presenter Thapelo Mokoena is hoping for a national discussion about the role of fathers in modern society.

The idea came to him as he stood at Loftus Versfeld rugby stadium with his son as guests of a recent Father and Son Sleepout on the main field.

"I wish that this initiative could be more than just a Loftus stadium initiative. It’s a national discussion. Fathers are not present in their sons’ lives. How do we reconstruct this?‚" he said.

Recalling a hit-and-run accident that nearly claimed his life two years ago while he was jogging‚ he said: "The one thing that stayed with me was that life is too short. My son was one-year-old then. I was travelling quite a bit.

Imagine if my life was lost in that accident? I now realise that this life thing we live is all about one thing only – love and happiness. For me it would be traumatic if I get to work so hard and not spend quality time with those I love."

The sleepout‚ which involved camping in luxury tents on the main field at Loftus‚ was part of a rewards programme for a cellphone provider's customers‚ and included interaction with players from the Blue Bulls.

Commenting on the experience‚ Mokoena - whose brothers used to play rugby - said it was "absolutely incredible".

"So much goodness comes out of giving a bit more than just a minute to things that really matter. This was one of those initiatives‚ campaigns and ideas that allow for fathers to not be that old-school traditional father who is just present in their children’s lives‚ but who is actually a part of their everyday lives.

"It’s nice for us to create the conversation and the platform to focus on fathers and boys. We need to take care of that mind and precious masculinity and raise them to become champions‚ not just people who put the groceries on the table.