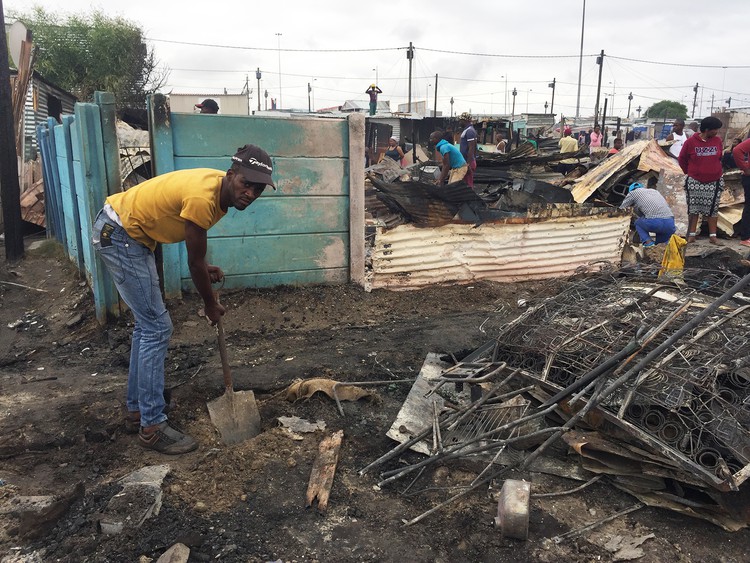 Hundreds of residents‚including young children‚were left homeless early morning on Tuesday after a blaze ripped through Doornbach informal settlement near Table View. It destroyed over 100 shacks.

The sprawling informal settlement opposite Dunoon township is also commonly known as Kwa 5. There were no injuries. The cause of the fire is unknown.

In the morning smoke could still be seen rising into the sky. Fire victims began to clear the charred debris on their plots to start rebuilding their homes. Some sifted through the piles of debris in an effort to salvage some of their belongings.

Two dead‚ 160 homeless after night of fires in Cape Town

Two people died and about 160 lost their homes in fires in Cape Town early on Saturday.
News
4 years ago

The fire may have started outside of Unathi Lingela’s two-room shack where he lives alone. The 29-year-old appeared confused when GroundUp sought comment from him.

He said he woke up after getting choked from smoke and heard some residents kicking his door telling him to get out immediately. His shack‚ he said‚ was engulfed in smoke and he was unable to see but luckily his neighbours kicked his door open and pulled him to safely.

He said he was not drunk the previous night and he does not own any electrical appliances. Nor does he own a gas or paraffin stove. He said some residents had seen the fire starting outside his shack door.

Like Lingela‚ Tino Mtesi‚ 31‚ was living alone in a one room shack. He too woke up to flames licking the zinc of his shack. He rushed to safety leaving everything behind. “I am a bricklayer I lost all my building tools and my ID. I didn’t have time to salvage anything.”

Cape Town Fire and Rescue Service spokesperson Theo Layne confirmed that the blaze left over 500 people displaced. He said the fire started at about 5:30am. He said 42 firefighters from seven fire stations were dispatched to battle the fire which was extinguished at 9:30am. “The cause of the fire is undetermined‚” he said.