Over 600 wooden sculpted heads in Johannesburg to be refurbished 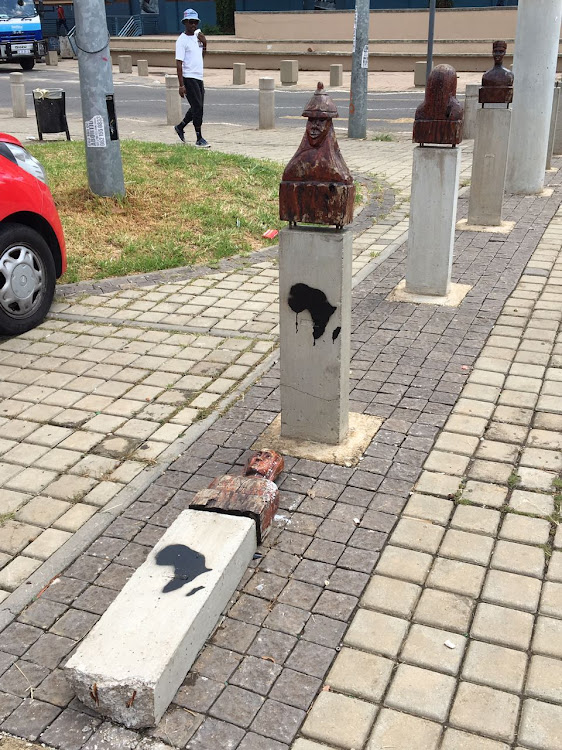 Sculptor Americo Guambe was unhappy when he saw some of the over 600 wooden sculpted heads in the inner city of Johannesburg were damaged‚ missing or stolen.

“If you know that place [Mary Fitzgerald Square] and how it was before‚ there were plenty‚ plenty [of heads]. Now when I went [there] last week‚ I just found they put some concrete stuff there to replace the statues.”

He added: “I was not happy. Concrete is just concrete. It’s not something that has been designed to make the place nice.”

Guambe‚ two artists and six assistants have started refurbishing the heads in Mary Fitzgerald Square before moving on to the Newtown Cultural Precinct. He will lead the team and was also involved in the original project in 2001 and 2002.

This is a project between the City of Johannesburg and the Johannesburg Inner City Partnership Forum and the first phase has to be finished before July this year.

Guambe believes the heads should be refurbished biannually or annually to make it “look nice all the time”.

“It took too long before we refurbished them‚ so it gets dirty. It’s not like you can use some sandpaper and mend them and varnish. We need to look after it all the time.” Jennifer van den Bussche‚ involved with the project and director of NGO Sticky Situations‚ believes it is “pretty good” that the public installation made out of wood lasted for more than 15 years.

“Public art is a fickle thing ... Obviously it’s very sad to see art being used and disappear‚ but it’s the nature of a public space. Isn’t the bigger question about how we look after our public spaces‚ both from a civil society perspective as well as a government perspective?”

Van Den Bussche believes the question should be what the role of public art is.

“If we made all public art out of concrete then it would be a pretty bloody boring city. You can’t make things out of metal‚ because metal tends to disappear.”

Community Development MMC Nonhlanhla Sifumba said the heads have been a “distinctive feature” and will be decorated with “colourful mosaic designs”.