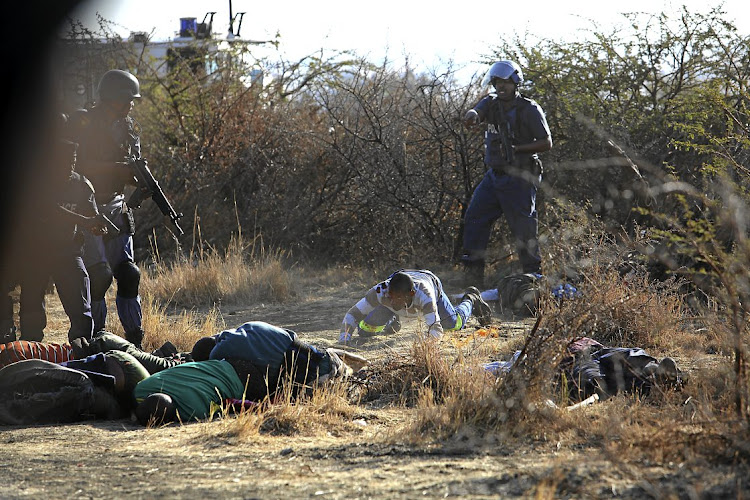 2012 The Marikana massacre on August 16. A total of 34 striking miners were killed and 78 injured in what was the single most lethal use of force by South African security forces against civilians since 1960.
Image: Alon Skuy

Mpembe‚ 55‚ and Salmon Vermaak‚ 53‚ both former police officers‚ were granted R5‚000 bail while Nkosana Mguye‚ 38‚ Collin Mogale‚ 49‚ Katlego Sekgweleya‚ 39‚ and Khazamola Makhubela‚ 49‚ were granted bail of R2‚000 each. The six appeared in the Rustenburg Magistrate Court where they stand accused of murder‚ attempted murder and attempting to defeat the ends of justice.

President Cyril Ramaphosa has come under fire on social media after he was spotted with the infamous former Gauteng health MEC Qedani Mahlangu on ...
Politics
4 years ago

Mpembe‚ along with Gideon van Zyl‚ Dingaan Madoda‚ and Oupa Pule are charged with defeating the ends of justice after they allegedly failed to report and concealed the death in custody of Modisaotsile Sagalala on August 16‚ 2012.

They allegedly attempted to pass off Sagala’s death as that of Andrew Saffey who died in hospital on August 16‚ 2012.

The former deputy police commissioner is further accused of contravening section 6 (2) of the Commission’s Act after he allegedly gave false evidence at the Farlam Commission of Inquiry that Sagalala died in a police truck on August 16‚ 2012.

Both matters were postponed to June 18 in the Mafikeng High Court for pre-trial purposes.

Their matter is in connection with an incident in August 13‚ 2012 in which striking miners were stopped by police while making their way from the mine to a koppie. Five people died as police and striking miners clashed.