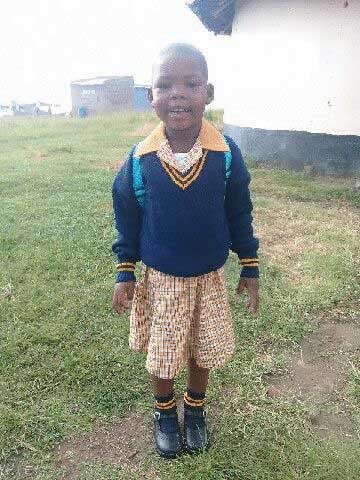 Little Lumka Mkhethwa, 5, of Bizana died in the broken pit latrine of her school.
Image: Supplied by DispatchLIVE

Little Lumka Mkhethwa’s life was cut short in the most harrowing way on Monday‚ drowning inside her school’s pit latrine – and now her father is devastated that the little girl may have been pushed.

The 5-year-old’s body was found on Tuesday inside the latrine in Bizana in the Eastern Cape‚ a day after she had gone missing.

Lumka's father‚ Vuyani Mkhethwa‚ said the family was not coping.

“Although we do not know the details of how this tragedy happened‚ from how she was found it does not look like she was using the toilet because she still had her underwear on.

“From the position of her legs it leaves us with the fear that she may have been pushed.”

This fears comes as the family demanded answers.

“We do not understand how this happened‚” he told TimesLIVE’s sister publication‚ the Daily Dispatch. “We were under the impression that children are escorted to the toilet‚ especially at that age.

“We have serious questions about the responsibility of the teachers but we have received a visit from department officials‚ who have promised to investigate. We will decide our course of action after that.”

The provincial government must publicly account for the "continuing appalling state of many schools in the Eastern Cape"‚ the South African Human ...
News
4 years ago

Basic education minister Angie Motshekga says it is “completely unacceptable” for a five-year-old child to have drowned in a school pit latrine in ...
News
4 years ago