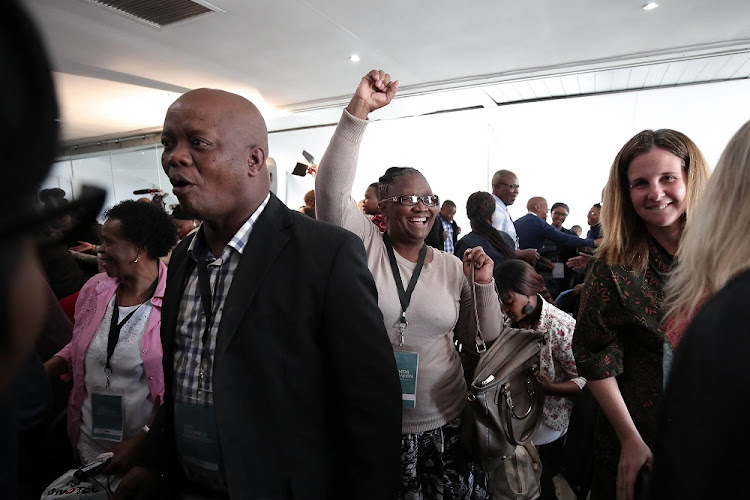 As 135 claimants - survivors and families of the victims of the Life Esidimeni relocation debacle - were awarded R1.2 million each as compensation on Monday‚ no criminal action has as yet been taken against any of the officials behind the decisions that led to the tragedy.

Journalists asked Gauteng Premier David Makhura if he would pursue criminal charges against those government officials censured by retired deputy chief justice Dikgang Moseneke‚ for their roles in the relocation of mental patients from the Life Esidimeni facilities to poorly equipped premises that left 144 dead and 1‚400 mental patients experiencing “torture” at NGOs.

Makhura said only that criminal investigations are ongoing.

"There should be no stone that must be left unattended to‚" Makhura said.

All three officials have resigned.

"There's no reason why there shouldn't be criminal charges‚" said Nxumalo.

She said that the fight for justice was not over.

"This was only a halfway milestone for us.

"We were right all along‚ we did not actually make these things up. They really did happen‚" she said.

The Gauteng provincial government funded the arbitration hearing led by Moseneke and will pay the damages. The premier previously also pledged to build a monument in honour of the victims and is providing counselling services to the families.

Makhura said that government will implement Moseneke’s order without delay.

"There is no amount of money that can compensate for loss of life. We will implement everything‚" said Makhura.

The rights of mentally ill patients and their families were flagrantly violated and disregarded during the Life Esidimeni debacle‚ retired deputy ...
News
3 years ago

The 68 survivors and 67 families of those who died were each awarded R1-million in constitutional damages and R200‚000 in damages for emotional suffering and funeral expenses.

Moseneke also urged government to treat the family members of those who died‚ but were not part of the process‚ in the same way if they come forward for compensation.

The premier‚ who tried to hug families afterwards in view of the cameras‚ vowed to continue working with the families to ensure government continued to offer them a sense of closure.

"We will walk with them all the way‚" he said.