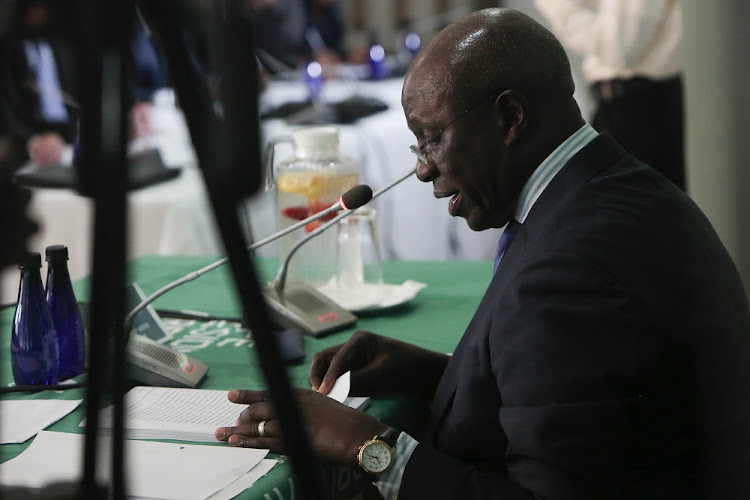 Police on Tuesday confirmed that they had sent dockets to the National Prosecuting Authority for a decision on whether to prosecute over the deaths of mentally ill patients.

SAPS spokesman Brigadier Vish Naidoo told TimesLIVE that the dockets were sent to the Director of Public Prosecutions.

He said: “We did send 45 inquests dockets to the DPP for decision.”

This comes just a day after retired deputy chief justice Dikgang Moseneke made damning observations in his judgment about the sheer lack of official accountability for the Life Esidimeni tragedy.

He said senior Gauteng heath officials had lied‚ played the victim‚ abused their power and knowingly violated the rights of mentally ill patients and their families because the instruction had come “from above”.

IN FULL | Life Esidimeni arbitration handed down by Moseneke

Retired deputy chief justice Dikgang Moseneke made damning observations in his award on Monday about the sheer lack of official accountability for ...
News
3 years ago

Moseneke made these remarks on Monday during his summary of evidence presented to the arbitration hearings‚ which began last year. He said the rights of mentally ill patients and their families were flagrantly violated and disregarded during the Life Esidimeni debacle.

Families of the mental patients treated cruelly by government must each receive payments of R20‚000 for their funeral expenses‚ R180‚000 for shock and psychological trauma and R1-million in constitutional damages. Government is supposed to pay the compensation in a lump sum no later than three months from March 19.

Moseneke said although arbitration was unusual‚ it was intended to give closure to families and a chance to mourn and grieve.

As a sign of respect‚ the former chief justice read out the names of the victims. The hearings were held after at least 144 psychiatric patients died after 1‚711 mentally ill people were moved from Life Esidimeni homes into ill-equipped and underfunded NGOs in 2016 in Gauteng.

'The truth is out': Life Esidimeni families glad they fought for justice

Marie Colitz, whose husband Freddie died at the Masego Home in Krugersdorp in an emaciated state, thought the “story” of her husband’s death at an ...
News
3 years ago

Moseneke said more than 1‚400 of the patients had faced “torturous conditions”. Some of them had been transported on the back of trucks like cattle‚ others did not get medication and some appeared to have starved to death.

The Sowetan reported on Tuesday that the ANC in Gauteng has called its provincial executive member Qedani Mahlangu - who was MEC for health at the time of the tragedy - to account before the integrity committee in relation to the saga.

Mahlangu is due to appear before the committee‚ led by ANC veterans Trevor Fowler and Mavuso Msimang.

In his remarks on Mahlangu‚ Moseneke said: “Ms Mahlangu‚ too‚ denied she was administratively responsible for the mass death and torture related to the Marathon Project. She said she knew nothing. In my view she took political responsibility for the horrid failing in the department she was in charge of. On all accounts she was at the helm of the Marathon project. She was the ultimate leader and commander of the project. As the ultimate leader of the project and member of the executive council‚ she failed to explain why she allowed so many lives of defenseless mental healthcare users to be placed at risk for no good reason.”

Murder charges can be brought - Bloom on Life Esidimeni

As 67 families of the victims of the Life Esidimeni tragedy are awarded R1.2-million each‚ the officials behind the tragedy remain free.
News
3 years ago

Retired deputy chief justice Dikgang Moseneke made damning observations in his judgment on Monday about the sheer lack of official accountability for ...
News
3 years ago