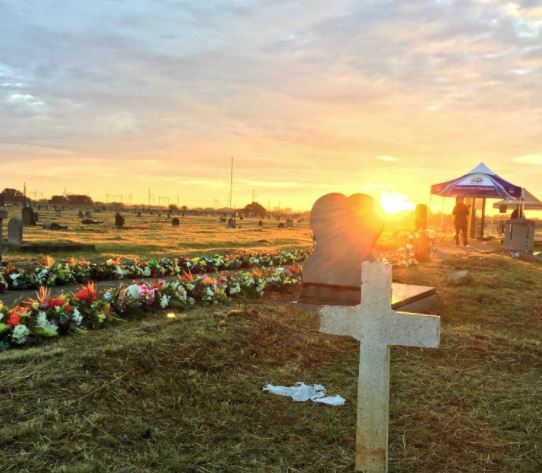 SABC was live from Sharpeville on #HumanRightsDay .. The photos that I post this morning will reflect the mood where on this day in 1960 - 69 people were brutally massacred and 200 injured during a peaceful protest against pass laws...
Image: Leanne Manas via Twitter

SABC broadcaster Leanne Manas tweeted: “Abrupt and frightening end to our broadcast from Sharpeville cemetery as two factions of the PAC stormed in front of our cameras and started threatening each other violently. Thanks to amazing crew for shielding and running me out of there! Ducked a few blows. See y’all tomorrow.”

Abrupt & frightening end to our broadcast from Sharpeville cemetery as 2 factions of the PAC stormed in front of our cameras & started threatening each other violently. Thanks to amazing crew for sheilding & running me out of there! Ducked a few blows. See y’all tomorrow 🙏 sharp

The SABC was broadcasting from Sharpeville in commemoration of Human Rights Day on Wednesday.

The youngest victim of the #SharpevilleMassacre. James was just 12 years old and on his way home from school when he got caught up in the crowds and was gunned down.. #HumanRightsDay pic.twitter.com/u0iYGAxEGr

Human Rights Day commemorates the anti-pass demonstration outside the Sharpeville police station near Vereeniging on March 21‚ 1960 where 69 people were killed and close to 200 people were injured. Protesters marched to the police station to hand over their passes and demanded an end to the pass laws before the police opened fire on the crowd.

SABC journalist Aldrin Sampear tweeted: “PAC has two factions marching in opposite directions on one road in Sharpville‚ commemorating the same.”

🙈 PAC has two factions marching in opposite directions on one road in Sharpville, commemorating the same #SharpvilleDay ... #HumanRightsDay

#HumanRightsDay #Sharpeville PAC members singing at the grave site, remembering all the lives lost on this day in 1960 #SABCNews pic.twitter.com/o19KwsPUKj

Prof Mangaliso Sobukwe and all forebears of Pan Afrikanist Congress of Azania are turning in their graves. When will Afrikans start to stand united? It's a sad thing to happen on such a glorious day where many lost their lives so we can be free

For 365 days the PAC is dead under a rock, come this day, that they should have embodied and ran with , all they can do is fight among themselves. Over what? Nothing is left of this once mighty giant, sad.

So sad. Each faction wants POWER. And the significance of the day fizzles away. Robert Sobukwe must be turning in his grave.

Dompas is dead‚ but the child is not: Mabuza

Deputy President David Mabuza quoted Ingrid Jonker’s poem Die Kind (The Child) on Wednesday during his speech during the commemoration of Human ...
Politics
4 years ago

South African billionaire Magda Wierzycka apologised on Wednesday for commemorating the Sharpeville Massacre in a tweet featuring a photograph of ...
News
4 years ago

The youth sit outside and enjoy the free wifi, seemingly unaware that where they sit is the spot that defined South African history.
News
4 years ago