The youth sit outside the centre and enjoy the free wifi, seemingly unaware that there is the spot that defined South African history. 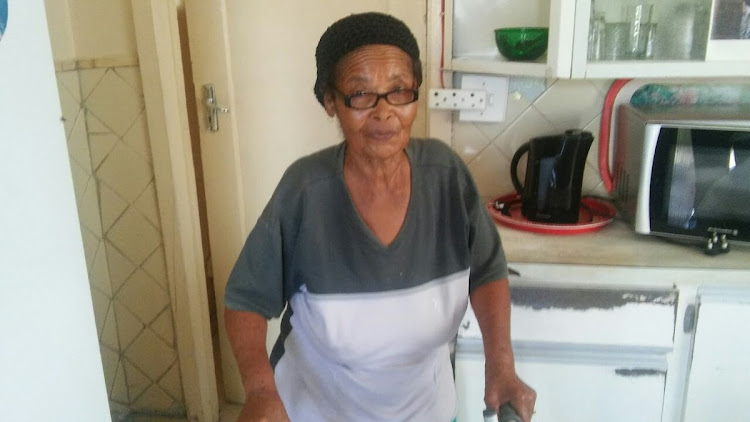 Malita Tsolo, 82, still remembers the Monday in 1960 which started as an ordinary day of protests and ended up in bloodshed. Her dream now is just to have toilet in the house, a benefit she has never enjoyed in either apartheid or democratic South Africa.
Image: Penwell Dlamini

Malita Tsolo, 82, helped an organiser disguise himself as a woman pretending to carry a baby while he handed out pamphlets to organise the protest march in Sharpeville 58 years ago.

Today she still remembers that day, when 69 people were killed by apartheid police, as if it was yesterday.

She was with the protesters who gathered at the Sharpeville police station on Monday morning, March 21 1960. Tsolo had been part of the underground structures which worked on the documentation, posters and other aspects of the march.

She was married to the older brother of Nyakane Tsolo, who was at the forefront of the Sharpeville march. Malita tried her best to keep out of the public eye but on that fateful day she had to be at the police station where all her comrades were. She was a member of the Pan Africanist Congress and remains one even today.

She said early that Monday morning the organisers began closing the arterial roads to make sure that no one left for work as a lot of planning had gone into the march.

“I was a silent partner to Nyakane. I ensured that I keep material that police were not supposed to see. I used a pillowcase to hide the documents and other material.”

But while she was at the protest she was asked to go back to her home, not far from the police station, to check on two little children aged four and two, who were left there.

Less than 30 minutes after she arrived home, she heard a loud noise coming from the police station.

“I thought it was just firecrackers. It never crossed my mind that police would open fire on so many people because there were women and children present there,” Malita explained.

When she rushed back, she saw people running around and it was only then she realised that people had been shot by the police.

Her husband’s cousin and the husband of her sister-in-law were both killed in the massacre. But that was just the beginning of the agony. Police later raided the house where she lived.

“They took the first pillow and looked inside and found nothing. Then they took the pillow with the secret document. I was holding a little baby in my arms. I held it tight to my chest. I looked towards heaven and began to pray to God to save us all. He heard my cry and the police officer took the pillow and simply threw it away,” Malita explained.

Malita and her family had to be strong as these raids would become a daily occurance for decades until former president Nelson Mandela was released in 1990 and the apartheid police stopped.

As she concluded the interview, Malita asked if she could convey a message to the government.

“I am very weak now. I have had four back operations and I have high blood pressure. Please tell the government to build me an inside toilet. It is difficult for me to get out at night just to go to the bathroom,” she requested. 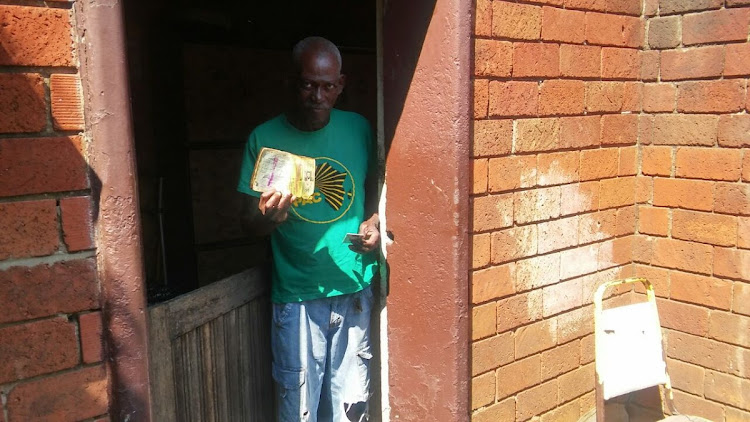 Mokhethi Mochesane, 73, of Sharpeville shows a dompas which he received in the 1970s and keeps in memory of the fight against apartheid laws. Mochesane lives alone in his house and still endures the pain of a bullet lodged in his left leg which he took in 1960 when the police opened fire on protesters. He was just a teenager.
Image: Penwell Dlamini

A few streets from her home, closer to the police station, lives Mokhethi Mochesane, 73. Mochesane lives alone in his house. He is also very ill. When we arrived at his home he complained to the PAC leader, who begged him to do the interview about the pain.

Mochesane was just 15 when he went to join the march in 1960. He remembers every detail of what happened.

“The night before we were very busy. We did not sleep. We went around the township mobilising people. We were  already in the streets very early in the morning. I still remember the day. It was a Monday. I was wearing an Orlando Pirates jersey on the day.

“When we were at the Sharpeville police station, I was next to the gate. I remember hearing one of the police commanders shouting ‘fire’. I never thought he actually meant they must shoot us. We were not carrying any stones. We had nothing in our hands that was a threat to the police,” Mochesane recalls.

I remember hearing a police commander shouting ‘fire’. I never thought he actually meant they must shoot us.

As police fired relentlessly, he ran for his life and was shot in his left upper thigh. A bullet also hit him in his right leg. The bullet in his left leg is still lodged in his body. It is a source of  discomfort and he struggles to walk properly.

Mochesane ran with wounded legs to one of the local businessmen who took him to the hospital. But police followed and arrested him at the hospital after he had been stitched. He met Nyakane in the jail. He then spent two years in jail without trial.

He is also crying for the same thing: “I just need a toilet inside the house. It is difficult to move around at my age.”

Sharpeville still somewhat resembles what Tsolo and Mochesane grew up seeing in the 1960s. There is very little economic activity taking place. Potholes are the order of the day as the municipality, Emfuleni, has struggled to maintain the roads. 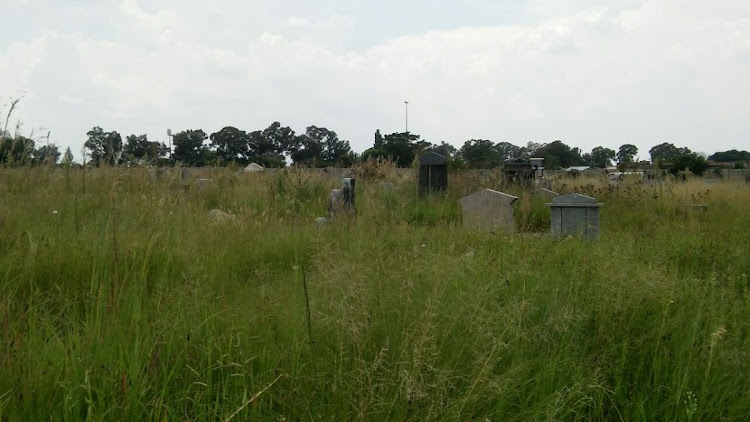 This is Vuka cemetery where Nyakane Tsolo, who led the Sharpeville march in 1960, was laid to rest in 2002.
Image: Penwell Dlamini

The old four-roomed houses which defined townships in the apartheid era are still dominant. Unemployment is visible as young people sit on the side of the road with very little to do.  Businesses that seem to thrive are restaurants selling kotas; filling stations; and taverns. These are the features that marked Sharpeville in 1960 and define the township today.

The Sharpeville massacre happened on March 21 at the local police station. Police opened fire at about 5,000 unarmed anti-pass protesters, killing at least 69 people – many of them shot in the back – and wounding more than 200.

The massacre created a crisis for the apartheid government, both inside the country and internationally. The government immediately declared a state of emergency and banned political meetings. Within less than a month, it banned both the Pan Africanist Congress, which had organised the action in Sharpeville, and the African National Congress. 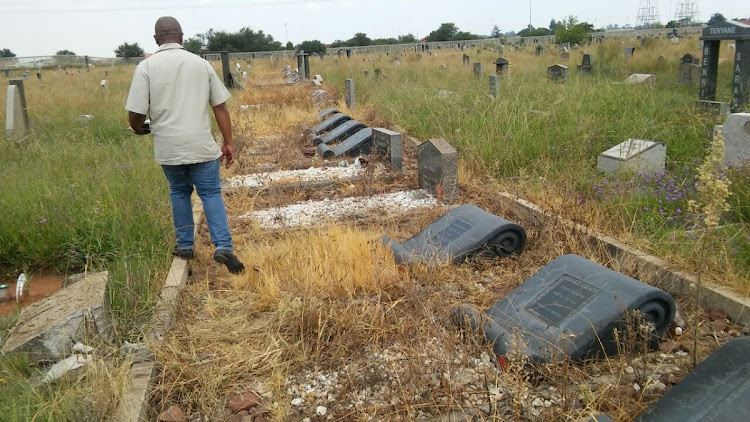 PAC regional leader Samuel Ngidi walks through the graves of the victims of the Sharpeville massacre in the Phelindaba cemetery, another graveyard that has not been well maintained.
Image: Penwell Dlamini

We visited the gravesites of those who died at the Phelindaba cemetery and found them badly in need of care. The grass is long and no proper maintenance of the facility is being done.

Nyakane’s tombstone is at the Vuka cemetery. He survived the massacre and went into exile. He died in 2002. His family assigned people to clean his tombstone for the March 21 commemoration. 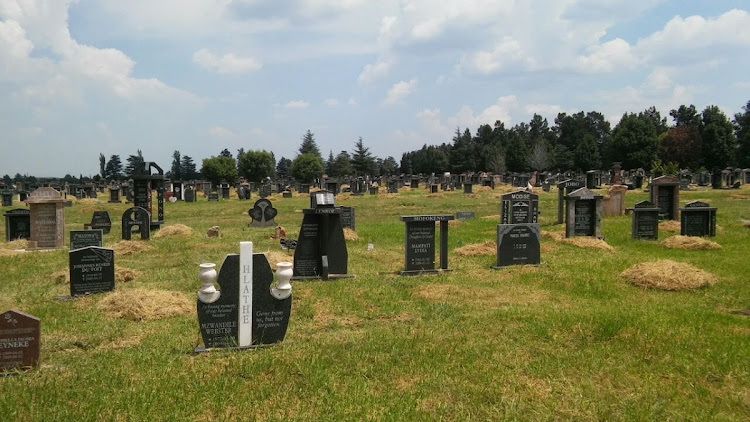 The old Vanderbiljpark cemetery which in the past belonged to traditional white suburbs. It is in a much better state than Vuka cemetery housing people from the former black neighbourhoods.
Image: Penwell Dlamini

Across from the Vuka cemetery is the Vanderbijlpark cemetery, which is in much better shape, a trend that was common during the apartheid era as it was reserved exclusively for whites.

Most of the young people in Sharpeville know the Sharpeville Exhibition Centre for one thing – free wi-fi.

They sit outside and enjoy the free internet connection, seemingly unaware that where they sit to chat on WhatsApp is the spot that defined South African history.