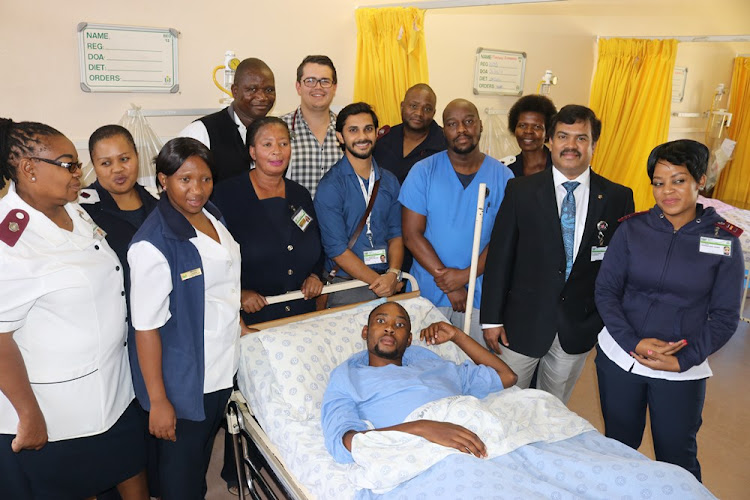 Successfully operated Tshepiso Mothibi being stabbed with a sharp self-made shank knife into brain through left eye is with Tshepong hospital neurosurgery unit staff where he was admitted.
Image: Supplied by North West Department of Health

Doctors in North West have successfully removed a knife from the brain of a 23-year-old man who was stabbed during a tavern brawl.

According to Tshepiso Mothibi‚ he was enjoying drinks at a tavern in Magogoe near Mahikeng on March 20 when a fight broke out and he was stabbed through the left eye.

With the sharp self-made shank knife still embedded in his brain‚ he was airlifted from the Mahikeng provincial hospital to the Tshepong Hospital where an operation to remove the knife was successfully carried out by Dr Tharun Krishna‚ head of the hospital’s neurosurgery unit‚ assisted by his team.

According to Polaki Mokatsane‚ CEO of the Klerksdorp/Tshepong Hospital Complex it was a “very complex operation” as a CT scan showed that “the whole sharp side of the knife was impacted and buried in the brain with only the handle side of the knife sticking outside”.

“The surgery took five hours to complete successfully and the patient responded well‚” Mokatsane said‚ adding that Mothibi was being kept in hospital for further observation.

Foreign-trained doctors get the all clear to write exams

“The patient underwent craniotomy to open a portion of the skull in order to expose the cranial base and base of brain to inspect the major structures that provide blood supply to the brain‚ namely the two internal carotid arteries‚ and the major cranial nerves‚ to protect and repair these vital structures” Krishna said. 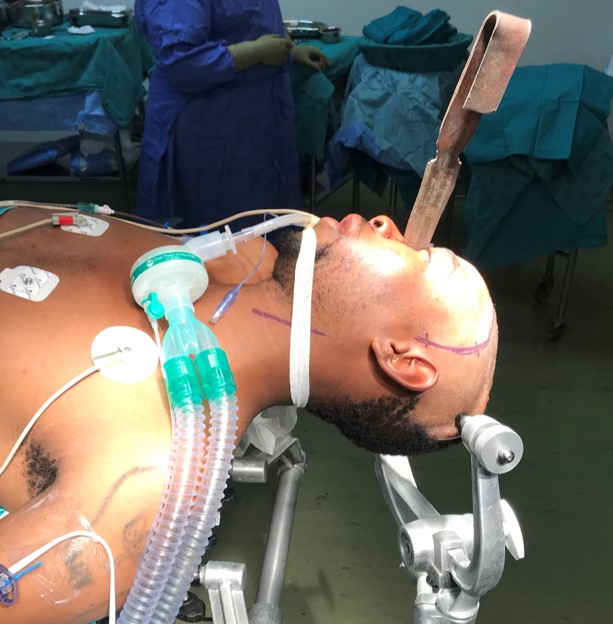 A Patient stabbed with a sharp self-made shank knife into brain through left eye.
Image: Supplied

“In theatre‚ the knife was carefully disengaged and withdrawn from the brain in a controlled manner‚ while being monitored under the magnified vision of operating microscope‚ without causing internal bleeding or injury to the structures of the brain.”’

Krishna added that Mothibi‚ who will be discharged on Thursday‚ had retained his vision in the left eye.“Post-operatively‚ the patient is doing very well‚ with vision of both eyes preserved. This patient was very lucky. Had the object cut through the major internal carotid arteries or injured the brain stem‚ he could have lost his life. In his case‚ the major structures of the brain were found to be intact‚ and his eyesight is also intact as the knife penetrated through the narrow corridor between the left eye globe and the root of nose‚ sparing the eye ball totally.”